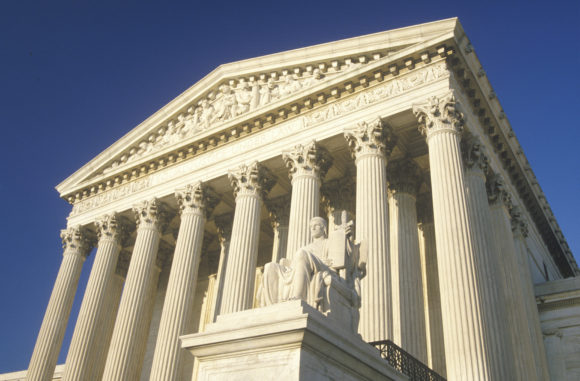 The U.S. Supreme Court is set on Monday to hear arguments in two cases that could make it easier to challenge the regulatory power of federal agencies in disputes involving the Federal Trade Commission and the Securities and Exchange Commission.

The justices are weighing an appeal by Scottsdale, Arizona-based Axon Enterprise Inc after a lower court dismissed the Taser manufacturer’s lawsuit contesting the constitutionality of the FTC’s structure in a bid to counter an antitrust action related to its acquisition of a rival.

In a separate case, the justices will consider the SEC’s appeal of a lower court’s decision reviving a challenge brought by a Texas accountant named Michelle Cochran to the legality of its in-house tribunal after it faulted her audits of publicly traded companies.

At issue in both cases is whether targets of an agency’s enforcement action may challenge its structure or processes in a federal district court or must first endure the agency’s administrative proceeding, which may be costly and time-consuming.

The FTC’s role is to protect consumers against anticompetitive and fraudulent business practices. The SEC’s job is to maintain fair, orderly markets and enforce investor protection laws.

Paring back the regulatory authority of federal agencies – which can enforce laws and rules in important areas such as energy, the environment, climate policy and workplace safety – has been a key goal of many business and conservative groups, which complain about what they call the “administrative state.”

The Supreme Court has a 6-3 conservative majority. Its conservative justices have signaled skepticism toward expansive regulatory power and the duty of judges, under Supreme Court precedent, to give deference to that authority. The eventual decisions in the two cases, due by the end of next June, could build on recent rulings by the court curbing agency authority.

A ruling last June, with the conservative justices in the majority and the liberals dissenting, limited the Environmental Protection Agency’s authority to issue sweeping regulations to reduce carbon emissions from power plants. In 2019, the court scaled back a legal doctrine that allowed agencies leeway to interpret their own rules.

The Federal Trade Commission Act and the Securities Exchange Act funnel judicial review of adverse agency orders to federal courts of appeal once those orders become final. The Justice Department, representing the agencies, said in a legal filing that the statutes allow Axon and Cochran to assert their claims at the end of the agency adjudications, not before.

“The question here is whether Axon and Cochran may short-circuit the review schemes established by Congress by preemptively suing in district court to enjoin agency proceedings. They may not,” the Justice Department filing said.

Axon sued the FTC in 2020 in federal court in Arizona following an investigation by the agency into its 2018 acquisition of Vievu, a rival body-camera provider.

The company said the agency acts as “prosecutor, judge and jury” in violation of the U.S. Constitution’s Fifth Amendment guarantees of due process and equal protection under the law, and that its administrative law judges are unlawfully insulated from the president’s power to control executive branch officers under the Constitution’s Article II.

The San Francisco-based 9th U.S. Circuit Court of Appeals in 2021 threw out the case, ruling that under the FTC Act Axon must raise its claims in the administrative proceeding first.

In Cochran’s case, an SEC judge found that she failed to comply with auditing standards, fined her $22,500 and banned her from practicing as an accountant before the commission for five years.

After the Supreme Court in 2018 ruled that the way the SEC’s judges were appointed violated the Constitution, the agency set aside the decision against Cochran and assigned her case to a new, properly appointed judge.

Cochran sued in 2019 to stop the enforcement action, like Axon contesting the SEC’s in-house judges under Article II.

A federal judge in Texas threw out Cochran’s challenge, but the New Orleans-based 5th U.S. Circuit Court of Appeals in 2021 revived the case.