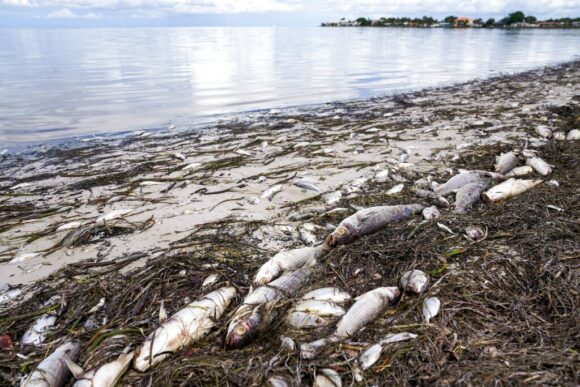 A new study by University of Florida researchers has provided one of the strongest correlations yet, showing that red tide outbreaks in coastal waters are exacerbated by man-made pollution.

“There has been this kind of uncertainty about whether there is this human link,” Christine Angelini, co-author and director of the University’s Center for Coastal Solutions, told the Miami Herald. “For the first time, this paper really shows that.”

Red tide can cause respiratory inflammation, including asthma attacks, along with itchy skin, watery eyes and fish kills. While naturally occurring and chronicled for centuries, the outbreaks appear to be worsening in many parts of south and southwest Florida in recent years, ruining the beach experience, adding to health care costs, and scaring off tourists, according to news and scientific reports. The outbreaks are caused by the rapid spread of the reddish-colored algae Karenia brevis.

The study, published in the journal Science of the Total Environment, examined the Caloosahatchee River in southwest Florida, which flows from Lake Okeechobee. Previous research looked for a causal link between nitrogen, from fertilizer and septic tanks, and red tide. But the University of Florida study examined longer-term data from water-quality and red tide databases over nine years, the Herald reported.

The study results show a clear correlation between higher amounts of nitrogen from the river and greater intensity of red tide blooms on the coast.

“We discovered that nitrogen-enriched Caloosahatchee River discharges have consistently intensified K. brevis blooms to varying degrees over time,” the study’s abstract notes. “River discharge was typically most influential at the earliest stages of blooms, while total nitrogen concentrations exerted the strongest influence during blooms’ growth/maintenance stages. These results indicate that discharges and nitrogen inputs influence blooms through distinct yet synergistic causal mechanisms.”

Eric Milbrandt, a co-author of the study, told the Herald that the knowledge “means that we can have an impact on the future. We can engineer, we can regulate, [and] we can decrease the nutrients and potentially then decrease algae blooms.”

Photo: Dead fish at Lassing Park in St. Petersburg, in 2021, after an outbreak of what investigators believe was red tide, perhaps fueled by the emergency pumping of wastewater from an old fertilizer plant at Port Manatee. (Martha Asencio-Rhine/Tampa Bay Times via AP) 2 Bodies Found Inside Vehicle in Path of Big California Wildfire