Top South Korean officials said a lack of proper crowd management was likely a factor behind a deadly surge of people that left at least 156 dead, with police faulted for not doing enough to heed warnings that masses were growing to dangerous levels.

Prime Minister Han Duck-soo said at a briefing with international media Tuesday that a lack of a sufficient system on crowd management may have caused the incident, adding a full review was ongoing. In parliament, Minister of Interior and Safety Lee Sang-min, expressed his “sincere apologies to the public over the incident.”

Yoon Hee Keun, commissioner general of the South Korean National Police Agency, said at a separate news briefing that the country’s 112 emergency line received multiple calls warning authorities of the “seriousness at the scene,” as thousands packed the narrow streets of the Itaewon nightlife district in Seoul.

“If you look at the contents of the calls, these were urgently informing of the danger of an incident as large crowds gathered before the incident occurred,” Yoon said. “Nevertheless, it is judged that the response in the field handling the 112 calls was insufficient.”

South Korea has launched a full-scale investigation into the country’s deadliest civilian crowd crushes. Those killed were trapped in an 3.2 meter-wide alley that connected a main street in the district to an area with restaurants, bars and nightclubs.

“In order to clarify the truth of this case and establish responsibility, we will promptly and strictly conduct intensive inspections and investigations in all areas without exception,” the police chief said.

President Yoon Suk Yeol, who put in place a week-long mourning period soon after the deaths, called on the government to come up with crowd control systems for events like the Halloween festivities in Itaewon that don’t have any specific organizer but draw masses of people.

The government’s response is shaping up as one of the biggest tests for the president, who came into office in May and has seen his support slump in recent months to hit around 30%.

There has been criticism in local media that the police presence was not large enough. Major national newspaper Chosun Ilbo said 137 officers were on the scene for the Halloween festivities on Saturday night that attracted about 100,000 people. The majority were there mainly for crime prevention.

Most of the victims were in their 20s and 30s, and 101 women were among the dead. At least 26 foreigners were killed. Maeil, a South Korean business newspaper, said it was the biggest loss of life among foreigners in the country since 2007, when a fire in an immigration office killed 9 people. 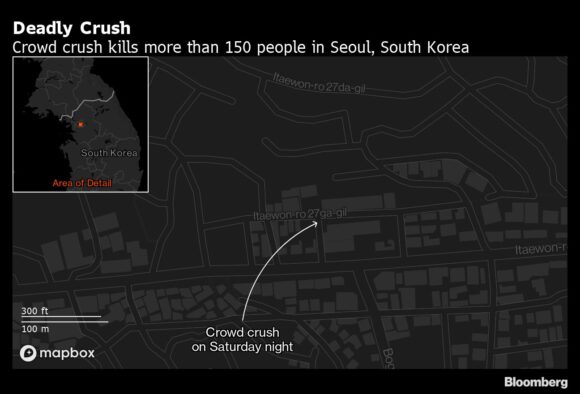 Experts say the density of people packed in the narrow and restricted alley may have reached a level that made such a disaster almost inevitable. Witnesses told local media that as people squeezed into the tiny space, some began to fall, causing others to tumble and pile into one another.

In Itaewon and near Seoul City Hall a few kilometers away, a steady stream of people brought flowers to memorials for the victims. The sense of loss has been amplified as TV, newspapers and social media share stories of the victims, most of whom died from asphyxiation as the breathe was squeezed out of the their body in the crowd crush.

–With assistance from Jenni Marsh.