South Korean investigators combed footage on Monday from more than 50 state and private closed-circuit TV cameras as well as from social media looking for answers to how a surge in Halloween party-goers trapped in narrow alleys killed so many.

As the country began a week of mourning, the death toll climbed to 154. Another 149 people were injured, 33 of them in serious condition. Citizens from at least two dozen countries were among the dead.

South Korean Prime Minister Han Duck-soo has promised a thorough investigation and authorities said they were focused on reconstructing the chain of events leading up to the surge and were looking at whether anyone may have been responsible for triggering the crush.

“We are analyzing CCTVs to find out the exact cause of the accident,” Police chief investigator Nam Gu-jun told reporters.

“We will continue questioning more witnesses, including nearby shop employees,” he said.

Tens of thousands of revelers – many in their teens and twenties and dressed in costume – had crowded into narrow streets and alleyways of the popular Itaewon district on Saturday for the first virtually unrestricted Halloween festivities in three years.

But chaos erupted when people poured into one particularly narrow and sloping alley, even after it was already packed, witnesses said.

The identification of the victims was nearly complete and funeral preparations can move ahead, Han said. “We will do our best to provide necessary support by reflecting the opinions of the bereaved families as much as possible.”

On Monday, people laid white chrysanthemums, drinks and candles at a small makeshift altar off an exit of the Itaewon subway station.

Jung Si-hoon, a retiree, placed an old wooden cross at the altar, saying nothing could be done to bring back all the young people who had died.

“Those poor people, all at similar ages to my grandchildren… What more should we say? We should pray for them and wish they rest in peace,” he said.

On Monday afternoon, dozens of crime scene investigators and forensics officers descended onto the trash-strewn alleys which were eerily quiet with many shops and cafes closed.

One agent with the National Forensic Service team, in white overalls and a black ribbon of mourning pinned to his chest, operated a Leica 3D scanner, he said, “to capture the scene.”

President Yoon Suk-yeol, who has designated Itaewon a disaster zone, visited a memorial altar near the Seoul city hall and paid his respects to victims on Monday. 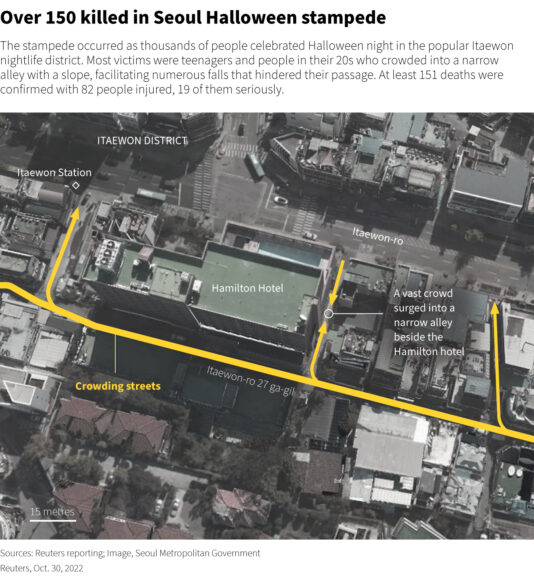 The crush came as Itaewon was just starting to thrive again after more than two years of COVID-19 restrictions. The disaster is the country’s deadliest since a 2014 ferry sinking that killed 304 people, mainly high school students.

Han said there had been incidents of people propagating hate speech by blaming victims, as well as incidents involving the spreading of false information and the posting of disturbing scenes of the crush online. A National Police Agency official said they were investigating six related cases.

Photograph: South Korean national flags fly at half-mast at the government complex in Seoul, South Korea, on Sunday, Oct. 30, 2022. A mass of mostly young people celebrating Halloween festivities in Seoul became trapped and crushed as the crowd surged into a narrow alley, killing dozens of people and injuring dozens of others in South Korea’s worst disaster in years. Photo credit: AP Photo/Lee Jin-man.