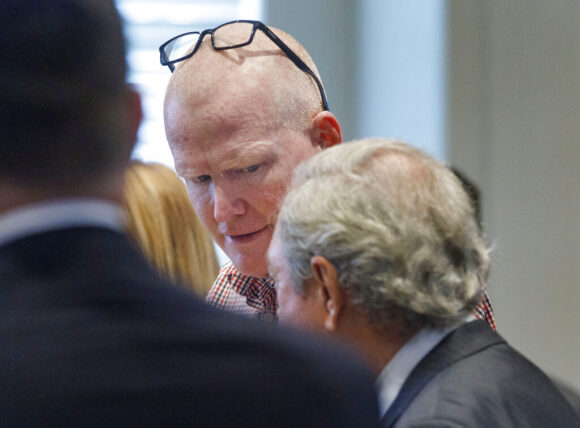 COLUMBIA, S.C. (AP) — Alex Murdaugh, the disgraced attorney accused of killing his wife and son, was indicted Friday by a grand jury in South Carolina on nine counts of tax evasion, adding to the slew of charges he faces in the aftermath of their deaths more than a year ago.

Prosecutors said Murdaugh, 54, made nearly $14 million as a lawyer over nine years, but also stole nearly $7 million from his law firm at the same time.

Through tax returns from 2011 to 2019, the grand jury indictments shed a light on a man who made millions at the law firm his family founded a century ago, but who also had large swings in income and stole about half as much money as he made from Peters, Murdaugh, Parker, Eltzroth & Detrick.

The latest indictments bring the total number of charges against the disgraced attorney to more than 100.

Murdaugh will be tried in late January on murder charges in the June 2021 shooting deaths of his wife Maggie and their son Paul at the family’s home in Colleton County. Prosecutors have said they will seek life in prison if he is convicted.

Murdaugh’s lawyers adamantly deny he had any role in the killings, but they have acknowledged his role in taking money from clients.

Nine counts of willful attempt to evade or defeat a tax were added to Murdaugh’s charges Friday. Prosecutors said he dodged nearly $487,000 in state income taxes. He faces up to five years in prison on each count if convicted.

Most of the other charges against Murdaugh deal with either stealing $8.8 million in lawsuit settlement money from badly injured clients, or families of people killed in wrecks or on the job, as well as a drug ring and money laundering scheme, according to the indictments handed down in nearly two dozen waves since September 2021.

Friday’s indictments show Murdaugh reported nearly $14 million in gross adjusted income from the firm on tax returns over the course of nine years, while prosecutors said he also stole nearly $7 million meant for the firm’s bank accounts and failed to pay taxes on the ill-gotten gains.

In his best year, Murdaugh reported making $5.3 million in 2013 after making $2.4 million the year before. But the later tax returns showed his legitimate income was drying up. Murdaugh said he made just $219,000 in 2017 and only $1.6 million over the next two years, according to the indictment.

On the unreported side of the ledger, Murdaugh stole nearly $3.8 million in 2019, a sharp increase over most years when he took hundreds of thousands of dollars from his firm, according to the indictments.

Around that time, Murdaugh managed to get a $3.5 million insurance settlement for the family’s longtime housekeeper Gloria Satterfield, who died in 2019 in a fall at a family home. The settlement was meant for Satterfield’s sons, but they say they never saw a dime before his arrest.

Another victim included an injured state trooper, and Murdaugh allegedly used a fraudulent bank account to divert the settlement money to himself, according to previous indictments.

Prosecutors said in court last week that the swirling financial problems are what led Murdaugh to shoot and kill his wife and son because he feared his schemes were about to be revealed and thought the sympathy over their deaths would buy more time to cover his tracks.

But they didn’t provide any direct financial compensation Murdaugh got for their deaths, and Murdaugh’s attorneys said he was a smart enough lawyer to know the violent deaths of his wife and son would bring more scrutiny into his life.

Murdaugh and his family were the biggest players in the legal scene in tiny Hampton County. His great-grandfather, grandfather and father were all elected prosecutors, and the law firm founded by his family was known for getting life-changing legal settlements in civil cases.

Photo- Alex Murdaugh, center, talks with his defense attorney Dick Harpootlian after a hearing in Colleton County on Monday, Aug. 29, 2022. Months after accusing disbarred attorney Alex Murdaugh of killing his wife and son at their South Carolina home, investigators and prosecutors have released few details about the evidence that they believe connect him to the slayings. (Grace Beahm Alford/The Post And Courier via AP, File)