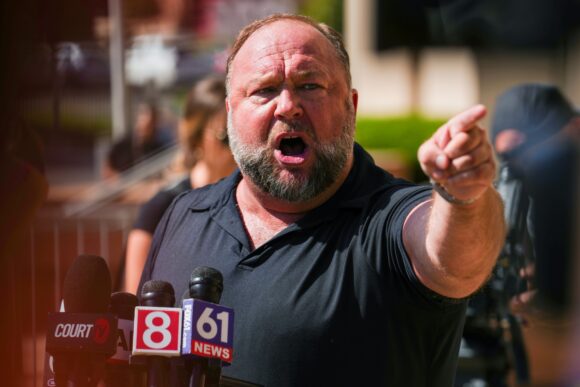 A lawyer for Sandy Hook families said Monday that significant punitive damages need to be imposed on Alex Jones to deter him and other conspiracy theorists from continuing to tell their followers the 2012 Newtown shooting was a hoax, in addition to the nearly $1 billion he already has been ordered to pay victims’ relatives.

Attorney Christopher Mattei’s comments came during a video conference hearing before a Connecticut judge on how much punitive damages the Infowars host and his company, Free Speech Systems, should pay victims’ families. In a hypothetical calculation, the families’ lawyers say punitive damages could total $2.75 trillion, but they have not asked for a specific amount.

Judge Barbara Bellis said she will rule at a later date.

Jones’ lawyer, Norm Pattis, argued any punitive damages should be minimal, because last month’s $965 million jury verdict on compensatory damages is so large and “unparalleled” it is the functional equivalent of punitive damages. Mattei disagreed.

“Here, where — in our view — the conduct really rises to the level of reprehensible, evil, really just malicious conduct, there’s no situation in which … nominal punitive damages would be sufficient under the law,” Mattei told the judge. “There’s really no way any of us, I think, can wrap our minds around what kind of depravity it took for Mr. Jones to do what he did.”

Jones, based in Austin, Texas, continued to bash the trial as unfair and an assault on free speech rights. He has said he will appeal the verdict and already has asked for a new trial. He also said he doesn’t have $2 million to his name, so he can’t pay the verdict.

Pattis on Monday questioned how the jury arrived at the $965 million figure. He said there was no evidence at the trial of the net worth of Jones or Free Speech Systems.

“The jury came up with an unusual verdict,” Pattis said. “You will never come up with an algorithm that explains it. These numbers are simply unparalleled in Connecticut history, perhaps in the history of any case in the United States.”

Twenty first graders and six educators were killed in the shooting at Sandy Hook Elementary School in Newtown. Eight victims’ relatives and an FBI agent who responded to the school sued Jones and Free Speech Systems, who were found liable last year for defamation, infliction of emotional distress and violating Connecticut’s Unfair Trade Practices Act.

All 15 plaintiffs gave emotional testimony during the month-long trial, describing how they have been threatened and harassed for years by people who believe the shooting didn’t happen.

Strangers showed up at some of their homes and confronted some of them in public. People hurled abusive comments at them on social media and in emails. And some said they received death and rape threats.

The jury’s verdict was meant to compensate the plaintiffs for their past, current and future emotional distress, the defamation and the violations of the Unfair Trade Practices Act. The jury also said punitive damages were warranted to penalize Jones for his conduct. Bellis will decide the amount of those damages.

Punitive damages are generally limited to attorneys fees for emotional distress and defamation, but there is no cap on such damages under the Unfair Trade Practices Act, which bars deceptive business practices and unfair competition.

The Sandy Hook families’ lawyers are to get one-third of any compensatory damages received, under a retainer agreement. So Jones and Free Speech Systems may be ordered to pay another $322 million in punitive damages to the plaintiffs in addition to the nearly $1 billion.

And Jones could be ordered to pay even more in punitive damages under the Unfair Trade Practices Act. Such damages typically are multiple times the compensatory damages, the families’ lawyers say. Mattei said Jones should be punished under the law for his continuing criticism of the trial, judge and plaintiffs’ lawyers.

Pattis countered there was no evidence presented at the trial that Jones sent anyone to threaten and harass the families. He also said a $1 billion verdict was high enough for punishment and deterrence, and no damages should be awarded under the Unfair Trade Practices Act.

In Texas, the parents of two other children killed in the shooting filed similar lawsuits against Jones. A jury in one of the cases ordered Jones to pay nearly $50 million in damages, and the second Texas trial is scheduled to begin around the end of the year. The $50 million verdict is expected to be reduced because of Texas’ caps on damages.