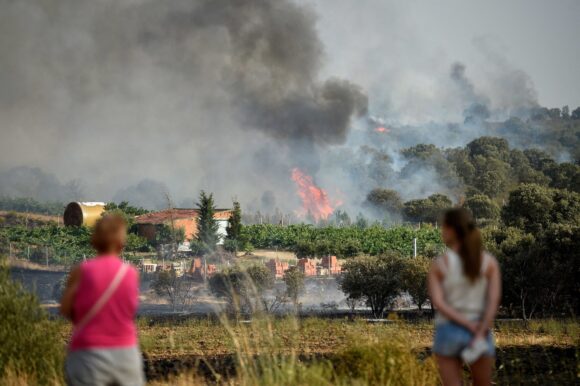 In Portugal’s Douro Valley on July 7, a wildfire burned close to Oscar Quevedo’s Quinta da Alegria vineyard. By the middle of the night, flames surrounded it. The vines around the edges, amounting to about a hectare, burned. In his 39 years, Quevedo says, “I had never seen such a big and fast fire in the heart of the Douro.”

All over Europe, temperatures in wine regions have been sweltering at new highs, and heat waves are moving north into such normally cool countries as Germany. In the UK, temperatures above 40C (104F) were recorded for the first time. Winemakers worry this will lower yields by 25% or more for this vintage. Many had already been slammed by early frost and hail. Increasingly intense heat waves are signaling that conditions could become even more extreme and unpredictable over time.

“Europe has been warming faster than the global average,” says professor Angel Hsu, a climate scientist at University of North Carolina at Chapel Hill.

By now wine lovers know how a mix of high temperatures, drought, and gusty winds make it easy to spark a wildfire and hard to stop its spread. Europe’s fire season came earlier than usual this year. Land has burned in France, Spain, Portugal, Greece, among others; thousands of people have been evacuated, and many have died.

Even if a fire doesn’t burn vines, smoke from nearby flames can ruin crops for miles. When heavy smoke hangs over vines for days, it can cause smoke taint in the grapes, which gives wines an ashy taste. In the past, this has affected wines in Napa and Sonoma in California and in Australia.

Still, rural fires are affecting only some wine areas, while just about everywhere vineyards are suffering from extreme heat and ensuing drought. High temperatures that persist can sunburn grapes, which won’t ripen well, and also hydric stress, which deprives the vines of enough water to flourish. They react by accumulating sugar more slowly, which delays ripening and harvest. Grapes are smaller, yields drop, and quality suffers.

Growers in such places as the Loire Valley don’t seem worried about fire and smoke. Further south, in Bordeaux, the story is different. Two major fires started around July 12, one along the coast near resort town Arcachon and the other in a pine forest south of Bordeaux, close to the vineyards in the Graves region. A raging fire was so close to the tiny Liber Pater vineyard that police ordered it evacuated on July 18. Before leaving, owner Loic Pasquet created firewalls to try to block flames. Luckily, the wind shifted, saving his vines from smoke. The average price of his reds is a cool $4,000 a bottle, and the rare 2015 vintage goes for $33,000.

Some 20,900 hectares of forest have burned, according to official figures from June 22. Thousands of people have been evacuated, and 2,000 firefighters and eight planes with water bombs are continuing to battle flames, though the fire’s progression has slowed. Earlier in the week you could smell smoke in the city of Bordeaux.

The good news is that no vines have burned, and the smoke seems to be blowing away from the vineyards, according to Cecile Ha of the CIVB, the wine trade association. Still, forecasters predict very high temperatures over the next few days.

One solution to excessive heat may be agroforestry. Bordeaux pioneer Château Haut-Bages Liberal in Pauillac planted trees in the vineyards to provide shade, cool the air, and create humidity, convinced that this helps its vines cope better with heat and stress.

Wildfires in Portugal and Spain

“Unfortunately, wildfires are a threat to all regions in Portugal,” explains Frederico Falcao, president of ViniPortugal. No burned vineyards have been officially reported, although the Civil Protection authority (ANEPC) website has listed dozens of active fires over the past 10 days.

In the Douro Valley, famous for port, heat has been brutal, with recent temperatures reaching 47C, the hottest since 1941. Most of the country is in severe drought.

Rob Symington, whose family has 27 vineyards and eight wineries in the Douro Valley and in Alentejo, says fire has not been a problem, but heat is reducing crop size. “The next four to six weeks, until harvest, will be crucial,” he adds. “If temperatures cool slightly and a small amount of rain falls, the harvest could be positive. ”

Current weather maps of Spain are completely red, indicating extreme temperatures everywhere. Fires blazed in regions such as Castilla y Leon, whose stars are Vega Sicilia and Pingus, and Andalusia, noted for sherry.

Though there are no fires in Rias Baixas, they are elsewhere in Galicia in the northwest, where fire burned part of a vineyard at Virgen del Galir, an estate that’s now part of the large family owned CVNE portfolio (and whose new wines I’ve applauded). CEO Victor Urrutia emailed a photograph that showed blackened trees around the vines, like sentinels warning of climate change.

Hot fire spots in Catalonia, in Spain’s northeast, are now under control; the Torres winery reports that none came close to its vineyards there or in other parts of the country. President Miguel A. Torres says, “The heat waves are getting worse … from seven to 10 days instead of only two or three. In some estates, having drip irrigation turns out to be key.”

Earlier this month, the Italian government declared a severe drought emergency in several northern regions, including Piemonte, famous for Barolo, and Friuli, in the far northeast. The key numbers are 50% less rain than usual and three times more fires than in an average year, according to Bill Terlato, CEO of Terlato Wine Group, which owns a wine estate in Colli Orientali Friuli. He feels somewhat safe, as the fires are to the south and west and his vineyards are in cooler high-altitude areas. Such regions may be most successful this year.

Heat is taking a toll in southern Italy, where Antonio Capaldo, chairman of Feudi di San Gregorio in Campania, estimates it will cause a 25% decrease in yields.

Don’t worry too much about top proseccos. The drought is affecting only the youngest vines, says Silvio Franco of producer Nino Franco, and those don’t go into the top wines.

Soaring temperatures in London made headlines, but winemakers in England aren’t stressed about it. Brad Greatrix of sparkling wine producer Nyetimber, whose vineyards range across Sussex, Kent, and Hampshire, says the heat came at a good moment in the growing season, when vines aren’t so susceptible to the effects. “If anything,” he says, “we are at the entry point of the optimum ripening weather for sparkling wine.” He’s more concerned about a lack of rain, which can eventually affect both quantity and quality.

At Chapel Down in Kent, another sparkling wine estate, grapes are about 1 ½ weeks ahead of where they’d be in an average season. Head winemaker Josh Donaghay-Spire anticipates an earlier harvest and a riper style of wines—the kind that would once have been impossible to achieve in England.

Right now, no one wants to predict how these weather extremes will affect the wines. Winemakers are by nature optimistic, always hoping the weather will suddenly turn for the better. Still, more and more acknowledge that every year brings bigger challenges. “There’s a limit on what our vines can handle,” says sustainability pioneer Torres in Spain, urging everyone: “Please, let us all switch from fossil oil to renewable energies and change our lifestyle.” That way, wine can have a more promising future.