Most New York City businesses on Tuesday will be required by law to add salary ranges to job ads, escalating a frenzy among employees and job seekers asking for pay increases in line with new postings.

Nearly a third of companies are considering or planning to increase the frequency of pay bumps, according to a survey of 884 companies in North America conducted in May and June by consultancy Willis Towers Watson.

Other firms are training managers and arming them with talking points on how to speak to staffers who ask why a posted salary is higher than what they currently make — and how to address the discrepancies emerging from office chatter and salary spreadsheets circulating within companies.

“With inflation and the rising cost of everything, I fear some staff may ask for more money than we can afford,” said Odes Roberts, the owner of Almost Studios, a small design studio in Brooklyn, New York. “But I also want everyone in our company to know who is getting paid what.”

Read More: More Companies Than Ever Are Sharing How Much Jobs Pay

Pay has long been a taboo subject in the workplace, but that’s changing fast. Younger employees are less hesitant to share their salaries with colleagues and sites like Glassdoor and Indeed are increasingly providing more pay data on specific companies and industries.

Fines for noncompliance in New York could be as much as $250,000, though officials say they won’t levy fines for first violations as long as companies post the information within 30 days of the warning.

States that have passed similar legislation include Washington and New York. California plans to go a step further, requiring companies to provide salary ranges for both new listings and, upon employee request, current jobs.

Even though companies with operations in New York City have had months to prepare for the new law, which was initially set to take effect in May, many executives still don’t feel ready for the change.

Ethena, which has 73 employees, published salary ranges for US job postings in April. The practice caused some initial discomfort, and a separate firm-wide salary review process led to pay boosts for a few current employees, but opening up was more effective than employees relying on industry scuttlebutt or rumors, Petraeus said.

The company is now considering adding bonus and equity compensation to its existing salary disclosures to give people a fuller picture of pay, even though the information isn’t currently required by New York City’s pay law. 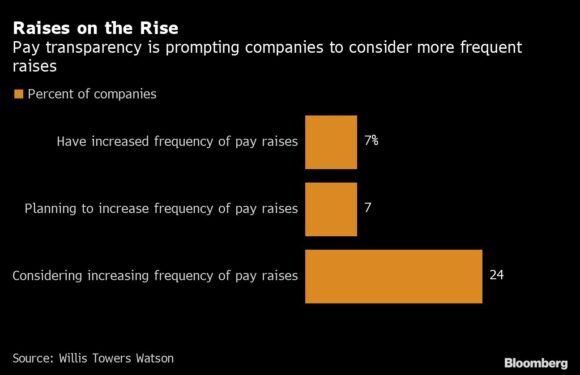 When pay disclosure rules became the norm in Colorado, some companies initially got around the issue by pulling job ads in the state. With the rise in remote work and pay transparency in big states like New York and California, it will be harder to hide from the trend.

By some estimates, as much as a third of the US workforce will be able to see salary ranges in job listings or request it by next year. A number of big companies, including Microsoft Corp., already have plans to roll out the practice nationally. And starting this week, job site Indeed will require employers to post salary information in New York City job ads unless they are exempt from the law.

Job postings by large companies on Indeed that already include salary figures show vast pay ranges. For example, a marketing analyst at American Express Co. listed an annual salary range of $55,000 to $105,000. Meanwhile, a senior executive assistant at AmEx was listed as $28.45 to $57.70 an hour. A posting for International Business Machines Corp. showed a $72,000 to $146,000 range for a technology sales representative, while a listing for a financial professional at New York Life Insurance showed a pay range of $59,063 to $114,273. IBM and New York Life didn’t immediately respond to a request for comment.

AmEx said it already includes salary ranges on job postings for open roles in the city and “although the law is only applicable within New York City, we have extended this same level of transparency across the US to ensure a consistent experience for job seekers interested in finding their place on our team,” said spokesperson Rohan Ramsay.

Businesses that don’t have a plan to handle the disclosures may find their workers going elsewhere, especially if the labor market remains strong.

“Companies have no choice but to do this,” said Allyn Bailey, director of hiring success at SmartRecruiters, which develops software for company recruiting processes.

Bailey said existing staff at one of her clients, a 500-person Colorado software firm, demanded the higher pay they saw advertised for new hires but were disappointed when the firm couldn’t immediately increase salaries. The company had planned to do it over three years but couldn’t afford to do it right away, leading a number of employees to quit. The company then had to raid competitors to fill the newly empty seats. 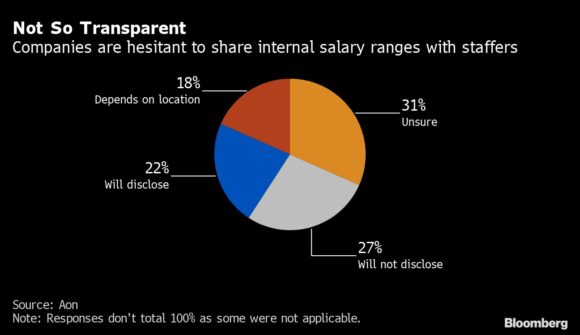 Some firms want to get ahead of the disruption. Willis Towers Watson found that 17% of companies already voluntarily list pay ranges and another 62% of organizations are considering it or already planning to do the same.

Software firm HubSpot decided in July to disclose salary bands, applicable commissions and bonuses for all jobs, nationwide. To prepare for the change, a few months before the company sat down with employees to discuss where their own compensation fell in those ranges and why their pay was structured that way.

Some new hires might get paid outside those ranges, and “that’s OK,” said HubSpot assistant general counsel Kelley Burwood in a webinar held for companies to discuss New York’s new disclosure rules, as the law simply requires that the firm make a good faith estimate. “We need to see how this is going first and work out the kinks,” she said.

Stacy Sahagian, senior director of people at Dashlane, a New York-based software firm with 368 employees, nearly half of them in New York, said in the webinar that she’ll release salary ranges this week for job postings in the city.

To create its ranges, Dashlane takes the midpoint of its existing salaries for a given role in a given country, then goes about 10% below and 5% above that to provide some flexibility. But the key is to go beyond the numbers and explain to both jobseekers and existing employees what they actually mean.

“Transparency without context does not achieve much,” she said.

Top Photo: NEW YORK, NEW YORK – JUNE 04: People walk by a Help Wanted sign in the Queens borough of New York City on June 04, 2021 in New York City. The U.S. economy added 559,000 jobs in May, bringing the unemployment rate down to 5.8 percent from 6.1 percent. Despite the positive economic news, millions of Americans are still looking for work or are in need of financial, food, and housing assistance. (Photo by Spencer Platt/Getty Images)