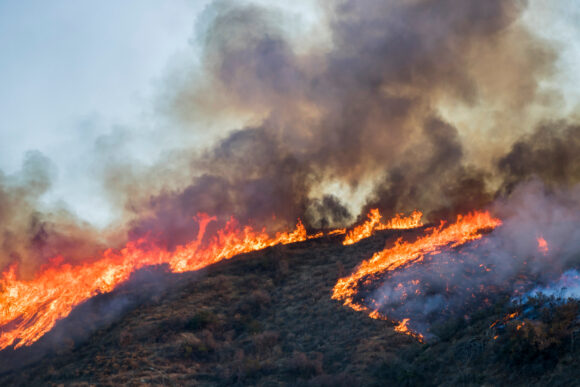 Neighbors of an open field from which a grass fire spread into their suburban Dallas subdivision, destroying nine homes, had complained that the field’s owner wouldn’t mow the grass, officials said this week.

That was when Davis said a spark from the mower ignited the tinder-dry grass, and a fire sped into the adjacent subdivision, damaging 26 homes, destroying nine of them.

Damage estimates topped $6 million, according to a city statement.

Field-mowing crews had been urged to have a spotter watch for sparks and ignitions, Davis said.

North Texas has been vulnerable to explosive wildfires for at least two weeks with temperatures topping 100 degrees Fahrenheit with 20-mph wind gusts and 20% humidity.

Fire crews working a 10 1/2-square-mile wildfire that destroyed 16 homes and damaged five others turned their attention Tuesday toward hot spots inside the fire footprint, officials said.

Fire crews are performing grid searches throughout the fire zone 50 miles southwest of Fort Worth, with particular emphasis given near homes within the fire zone.

With the fire 20% contained, crews also are working to secure fire lines around the fire zone.

And fire crews are standing down on the western shore of Possum Kingdom Lake after a fire that destroyed five homes was declared 100% contained.

This year has been plagued by wildfires fostered by severe to extreme drought throughout the West.

In California, firefighters were making progress Tuesday against a huge wildfire that spread to a forest near Yosemite National Park, forcing thousands of residents to evacuate mountain communities. The fire is the second to strike the area. Another fire that broke out in the area earlier this month burned to the edge of a grove of giant sequoias.

In New Mexico, a prescribed burn in early April got out of control and grew to the biggest wildfire in the state’s history, blackening more than 500 square miles in the north of the state.