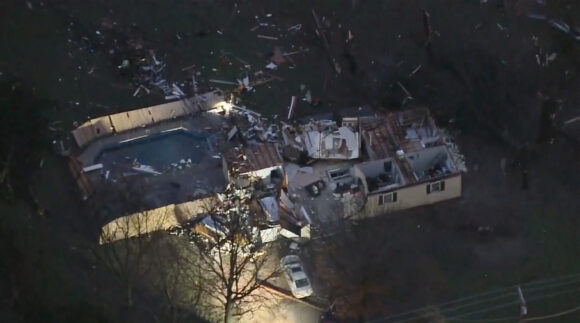 SIOUX FALLS, S.D. (AP) – A massive storm blowing across the country spawned tornadoes in parts of Oklahoma and Texas, including the Dallas-Fort Worth area, as much of the central United States from the Rocky Mountains to the Midwest braced Tuesday for blizzard-like conditions.

An area stretching from Montana into western Nebraska and Colorado was under blizzard warnings, and the National Weather Service said that as much as 2 feet (61 centimeters) of snow was possible in some areas of western South Dakota and northwestern Nebraska. Ice and sleet were expected in the eastern Great Plains.

Meanwhile, damage was reported in the Oklahoma town of Wayne after the weather service warned of a “confirmed tornado” shortly after 5 a.m. Tuesday. Video footage from Oklahoma TV station KOCO showed substantial damage to a home in Wayne, which is about 45 miles (72 kilometers) south of Oklahoma City.

There were no deaths or injuries due to the tornado, McClain County Sheriff’s Capt. Bryan Murrell said. But as authorities began assessing the damage to the town of Wayne on Tuesday morning, it was clear the damage was widespread.

“We’ve got multiple family structures with significant damage … barns, power lines down” in and around the town, Murrell said.

National Weather Service meteorologist Doug Speheger said wind speeds reached 111-135 mph (179-211 kph) and the tornado was rated EF-2. It was likely on the ground for about two to four minutes, according to the weather service.

“That’s the only (tornado) we’ve confirmed so far, although there are some other areas we’re still assessing” south and east of Wayne, Speheger said.

In Texas, at least two tornadoes were spotted along the front edge of the storm as it headed toward the Dallas-Fort Worth metropolitan area Tuesday morning, though the extent of any damage was not immediately known.

The National Weather Service warned that up to about half an inch (2.5 centimeters) of ice could form and winds could gust up to 45 mph (72 kph) in parts of Iowa, Minnesota and South Dakota. Power outages, tree damage, falling branches and hazardous travel conditions all threatened the region.

All of western Nebraska was under a blizzard warning from Tuesday through Thursday, and the National Weather Services said up to 20 inches (51 centimeters) of snow was expected in the northwest. Winds of more than 50 mph (80 kph) at times will make it impossible to see outdoors, officials said.

The Nebraska Department of Transportation closed stretches of Interstate 80 and Interstate 76 in western as heavy snow and high winds made travel dangerous. The Nebraska State Patrol, which was called to deal with several crashes and jackknifed semitrailers overnight, urged people to stay off the roads.

“There’s essentially no one traveling right now,” said Justin McCallum, a manager at the Flying J truck stop at Ogallala, Nebraska. He said he got to work before the roads were closed, but likely won’t be able to get back home Tuesday. “I can see to the first poles outside the doors, but I can’t see the rest of the lot right outside. I’ll probably just get a motel room here tonight.”

The South Dakota Department of Public Safety tweeted Monday: “This is a `we are not kidding’ kind of storm.” People were urged to stock up on essentials and stay home.

A 200-mile (322-kilometer) stretch of Interstate 90 across western South Dakota was closed Tuesday morning due to “freezing rain, heavy snow, and high winds,” the state’s Department of Transportation said. Interstate 29 was also expected to close and secondary highways will likely become “impassable,” the department said.

Farther south, tornadoes, strong winds, hail and flash flooding were expected Tuesday with eastern Texas, much of Louisiana and western Mississippi at greatest risk for severe storms. The severe weather threat continues into Wednesday for Louisiana, Mississippi, Alabama and the Florida Panhandle, according to the Storm Prediction Center in Norman, Oklahoma.

“It will be a busy week while this system moves across the country,” said Marc Chenard, a meteorologist at the National Weather Service’s headquarters in Maryland.

The weather is part of the same system that dumped heavy snow in the Sierra Nevada over the weekend before moving east.

In northern Utah, a tour bus crashed Monday morning as snow and frigid temperatures blanketed the region. The bus flipped onto its side in Tremonton after the driver lost control while switching lanes, the state’s Highway Patrol said in a statement. The Highway Patrol said 23 passengers were injured, including some seriously.

Top photo: A structure is damaged after a tornado touched down in Wayne, Okla., early Tuesday, Dec. 13, 2022. Millions of people in the central United States from the Rocky Mountains to the Midwest are bracing for blizzard-like conditions from a massive storm blowing across the country. States farther to the south, including Texas and Oklahoma, saw tornadoes early Tuesday, with some damage reported in Oklahoma. (KOCO via AP)