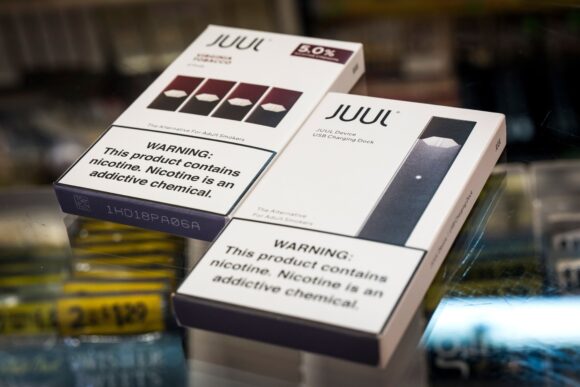 Juul Labs Inc. has agreed to pay $1.2 billion to resolve about 10,000 lawsuits targeting the e-cigarette maker as a major cause of a US youth-vaping epidemic, according to people familiar with the matter.

The accord, which hasn’t yet been finalized, was announced on Tuesday, but an amount wasn’t disclosed. The deal aims to resolve all personal-injury, class-action and school-district claims against Juul gathered before a judge in California for pre-trial information exchanges, the people said.

The proposed settlement comes as the embattled e-cigarette maker likely staved off bankruptcy last month with a cash infusion from long-time investors and by laying off hundreds of workers to cut costs. The company said earlier this week the settlement will be covered by the new financing.

Arik Ben-Zvi, a Juul spokesman, declined to comment Friday on the settlement. If enough injured plaintiffs and school districts sign onto the deal, it would mostly wrap up the multi-district litigation (MDL) case that has been before US District Judge William Orrick in San Francisco since 2019. Orrick must approve the settlement.

The Juul settlements include over 8,500 personal injury cases, over 1,400 governmental-entity cases, and 32 tribal cases, according to a release issued by the San Francisco-based Lieff Cabraser law firm, which is representing the plaintiffs, earlier this week.

The specific details of who is eligible to participate in the settlement are still being worked out, the people said. Personal-injury claimants, for example, will learn in February how much they can expert to receive, according to a form letter issued by plaintiffs’ lawyers leading the litigation, the people said.

“We can advise at this time that eligible plaintiffs will receive a minimum of $1,000 gross (before attorneys’ fees, costs, and any liens are deducted) and that the gross value of most claims in the settlement program is expected to be substantially higher,” the letter said.

Juul faced a wave of suits accusing it of failing to warn consumers about the risks of vaping and illegally marketing the nicotine-delivery devices to minors. School districts across the US have sued the firm — once backed by tobacco company Altria Group — for creating a so-called public nuisance by targeting children in their marketing efforts. District officials say vaping is disrupting classes.

Officials of the San Francisco Unified School District, which sued Juul over its vaping marketing, said Thursday they were “very pleased” with the settlement. They noted Centers for Disease Control and Prevention research showed 16% of San Francisco high school students surveyed in 2019 reported using vapes, compared to 7.1% of SF high schoolers in 2017.

Altria paid $12.8 billion for a 35% stake in the e-cigarette company and has since written down the value of that investment to $1.5 billion. More than 60 deaths and 2,700 hospitalizations have been tied to vaping-related lung injuries, according to the CDC.

The $1.2 billion deal comes as states are finalizing a separate $439 million settlement over the e-cigarette manufacturer’s marketing and sales practices, especially those targeting children. Juul agreed in September to accept strict limits on its marketing campaigns as part of the accord.

Photo: Packages of Juul Labs Inc. device kit and Virginia Tobacco pods are arranged for a photograph at a store in San Francisco, California/Bloomberg