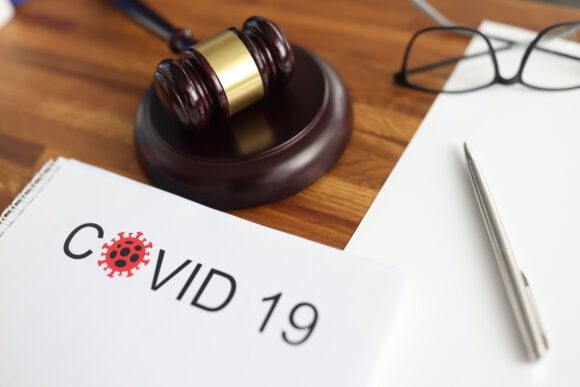 Rather than rule on them, a federal judge in Pennsylvania has allowed similar Covid-19 business insurance cases brought by owners of the Philadelphia Eagles and Philadelphia 76ers sports teams against their insurers to proceed to limited discovery.

U.S. District Judge Michael Baylson stated that the court prefers to wait on issuing any ruling on the insurers’ motions to dismiss the sports teams’ complaints until there is time to consider two recent Covid-19 insurance state court rulings and see if the state’s high court might weigh in.

The judge acknowledged that his ruling is unusual but he believes it is appropriate in the meantime to allow plaintiffs to initiate limited discovery and share documents in the event a court eventually finds in favor of the plaintiffs with similar cases. He explained:

“Although this may seem unusual, the issues raised by the parties may require discovery and because facts can be forgotten or mistaken, and human recollection is not infinite, this Court believes that it would be fair to allow the Plaintiffs to commence limited discovery to at least get some “beachhead” of facts in the possession of the Defendants that may be informative if it is eventually held, under authoritative court decision and based on Pennsylvania Law, that either of these policies have some ambiguity or that any of the other Plaintiffs’ theories are allowed to proceed.”

State Court Splits on COVID Coverage: Yes on Dentist, No on Tavern

Judge Baylson noted that the Covid-19 “legal landscape changed” as of November 30, 2022, when the Superior Court of Pennsylvania issued two en banc opinions on Covid-19 insurance coverage issues similar to those in the Eagles and 76ers cases. The appellate court ruled that a dental practice owned by Timothy Ungarean was entitled to coverage for income lost because of the state’s Covid-19 shutdown under its CNA policy, but the Grant Street Tavern owned by MacMiles LLC was not covered under its policy from Erie Insurance. Policy language made all the difference in the outcomes of the separate opinions.

While the Superior Court rulings are not binding on his district court, the judge stated the decisions are “worthy of consideration and warrant this court to wait additional time to render a decision.”

The court further commented that “some observers may perceive inconsistencies in reaching contrary coverage decisions in the two cases.” It noted that the Superior Court determined that one of the insureds (MacMiles) had not properly alleged physical damage, while all plaintiffs in the Eagles and 76ers cases have alleged physical damage to their properties due to the presence of Covid-19 on the surfaces and in the air. However, the Ungarean decision suggests that omission is not fatal to an insured’s position. Furthermore, a concurring opinion emphasized that the difference between the outcomes of MacMiles and Ungarean was “because these cases . . . are fact intensive matters which require, in each case, a review of the individual policy.”

Cases Before the U.S. District Court

The Philadelphia Eagles football team purchased a $1 billion insurance policy for coverage of certain risks relating to “physical loss or damage of property.” In 2022, after suffering a large loss of revenue, which the Eagles allege was due to Covid-19, the Eagles sought payment from Factory Mutual Insurance Co., which denied coverage. The Eagles then filed suit in state court, which FM removed to the federal court. Similarly, the Philadelphia 76ers basketball team purchased a comparable policy, but with different coverage terms, from Hartford Fire Insurance Co. After the 76ers incurred losses which it alleges were due to Covid-19, Hartford denied coverage and the 76ers filed suit in state court, which Hartford removed to federal court. Both insurers filed motions to dismiss the claims.

Although these are separate cases, with separate policy language, the judge said they present similar issues.

Both teams were required to close or restrict access to their insured properties due to the pandemic for several months, resulting in substantial financial loss. They claim that Covid-19 viral droplets could have been present in the air on the properties, and landed on and adhered to surfaces, thereby physically changing the airspace and surfaces of the properties. The properties therefore “could not fulfill their essential purpose and function.”

The Eagles claim they are entitled to coverage under two distinct coverages: (1) for property loss under the Time Element (business interruption) loss, and Extra Expenses resulting from the risks associated with the pandemic and (2) for “specified amounts incurred under the “Communicable Disease Response” and “Interruption by Communicable Disease” coverages.

The 76ers’ properties were insured by Hartford under four similarly-worded policies. The 76ers seek coverage for their loss of business income due to the “physical loss of or physical damage to” the 76ers’ properties. Among the 76ers’ arguments is that case law supports interpreting “physical loss” to trigger when a property is no longer usable or functional. The 76ers maintain that physical loss exists where the property’s use is reduced “to a substantial degree.”

FM contended that the terms of the Eagles’ policy limited coverage to the $1 million Communicable Disease Response, which it has paid. FM asserts it has no duty to pay for the “physical loss or damage to property and business interruption” because of an exclusion for losses caused by “contamination.” FM further argues that loss of use does not constitute physical loss because the latter requires a change to some physical condition of the property.

Hartford denied coverage, relying on its virus exclusion that states it “will not pay for loss or damage caused directly or indirectly by” the “presence, growth, proliferation, spread, or any activity of virus.” Hartford further argues that the 76ers fail to allege any facts that would establish “physical loss of or physical damage to” the insured property, that economic loss is not the same as physical damage, and that the properties were useable.

At the conclusion of the argument held on December 7, the court instructed the lawyers to confer about an initial discovery program and to submit proposals. The court has since determined that at this time discovery should be limited to an exchange of documents by both parties. The Eagles and FM have requested additional time, while the 76ers and Hartford have very different views of what discovery should take place, the judge noted. The court granted an unspecified period of time for parties to further confer.

In July, the judge had informed the parties that there would be no ruling until after Labor Day unless there had been a controlling appellate decision on the physical loss or damage issue.