Funding for the insurtech sector held steady in the second-quarter of 2022, coming in at roughly $2.4 billion, the same as the overall funding figure recorded for first-quarter 2022, according to data released by CB Insights last week.

The consistent quarter-over-quarter dollar figure comes after a sharp downturn in the first quarter, with the $2.4 billion funding total representing last than half the $5.4 billion insurtech funding total tallied by CB Insights for the fourth-quarter of 2021. 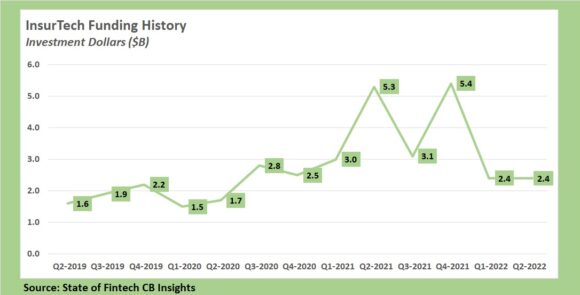 With record-breaking figures for all four quarters last year, aggregate insurtech funding came in at $16.8 billion, according to the figures in CB Insights’ report last week. That means the year-to-date funding for 2022 figure of $4.8 billion is just 29 percent of the deal value for all of last year.

CB Insights published the data online in its 197-page “State of Fintech Q2’22 Report,” which revealed that global fintech funding overall, including funding for banking tech, digital lending, wealth tech and capital markets tech in addition to insurtech, fell to $20.4 billion in the second quarter of 2022—down 33 percent from first-quarter 2021, and down 46 percent from second-quarter 2021. Like insurtech by itself, the number of global fintech deals fell 17 percent since first-quarter 2022, dropping to 1,225.

Both funding levels and deal counts for fintech overall dropped to their lowest quarterly amounts since fourth-quarter 2020, CB Insights reported.

As was evident in CB Insights first-quarter report, the number of M&A exits seem to be ahead of last year’s pace, already numbering 46 for 2022. Last year’s full-year total was 58.

CB Insights analysis also tracks the geographic distribution of insurtech deals, the percentage of early-stage vs. late-stage deals, unicorn births by quarter, IPOs and SPACs. The report also includes a list of the top 10 equity deals in the quarter, topped by the $200 million Series D funding round for Newfront Insurance, an insurtech brokerage platform.