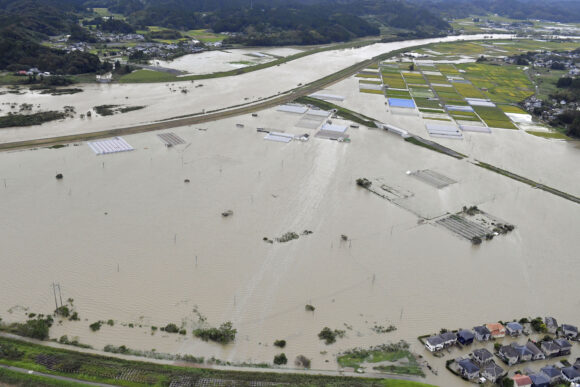 Initial insurance industry losses from Typhoon No. 14, aka Nanmadol, which hit Japan in September 2022, are an estimated 114 billion Japanese yen (US$768 million), according to PERILS, the independent Zurich-based organization that provides industry-wide catastrophe insurance data.

Based on loss data collected from the majority of the Japan non-life insurance market, this PERILS estimate encompasses the losses from the property line of business that were sustained by the Japanese non-life industry. It does not include losses from motor physical damage and goods covered by transportation-related policies.

The next updated estimate of the market loss from Typhoon Nanmadol will be made available by Dec. 20, 2022, three months after the event end date.

Typhoon Nanmadol was the 14th named storm in the 2022 Western North Pacific typhoon season and is generally referred to as Typhoon No. 14 in Japan, and internationally as Nanmadol, PERILS said. The system made landfall on Sunday, Sept. 18 at 7:00 pm local time near the city of Kagoshima on southern Kyushu Island.

The typhoon brought strong winds and torrential rain leading to flooding and landslides. The strongest gust was recorded at Yakushima Airport to the south of Kyushu at 183 km/h (114 mph). The system also produced extreme rainfall, with 907 millimeters (36 inches) of rain recorded in Misato town in Miyazaki prefecture within a 72-hour period, twice the monthly rainfall average in September for that region.

Despite causing widespread disruption and extensive property damage, the loss to the insurance industry from Typhoon Nanmadol was lower than initially feared. In comparison to the major 2018/19 typhoon events (e.g., Jebi or Hagibis), the lower-than-expected loss level can be attributed to Nanmadol’s track, which ran through an area of lower value concentration and the fact that the affected areas are frequently exposed to extreme weather events and therefore well prepared to withstand their impact.

Nevertheless, the losses caused by the event were significant, most notably in Miyazaki prefecture on Kyushu Island, PERILS noted.

These were predominantly the result of strong winds as well as flooding and earth movements triggered by the extreme rainfall, simultaneously causing disruption to power and water supplies. As such, Typhoon Nanmadol can be characterised as a particularly “wet typhoon” affecting a wide area across Japan.

“This is the first qualifying loss event since PERILS started providing coverage for Japan earlier this year. Major landfalling typhoons can have a devastating impact. Our hope is that the PERILS loss reports will be useful for risk assessment, helping to increase market transparency, and providing additional means to secure risk capital, particularly for critical perils,” commented Takashi Goda, senior advisor for Japan at PERILS.

“In these challenging times for the global re/insurance industry, having reliable industry loss numbers is more important than ever. Initial loss forecasts for Typhoon Nanmadol compared it to Typhoon Jebi, which generated a loss of more than one trillion yen for the Japan non-life industry. Our systematic, bottom-up approach, where we collect the loss information directly from the affected primary insurance companies, now shows that the Nanmadol loss is far lower, a fact which will likely be welcomed by the industry given the current market environment and availability of cat capacity,” said Luzi Hitz, CEO of PERILS.

Photograph: A town is flooded due to a heavy rain brought by Typhoon Nanmadol, in Kunitomi, Miyazaki prefecture, southern Japan, on Monday, Sept. 19, 2022. Photo credit: Kyodo News via AP.