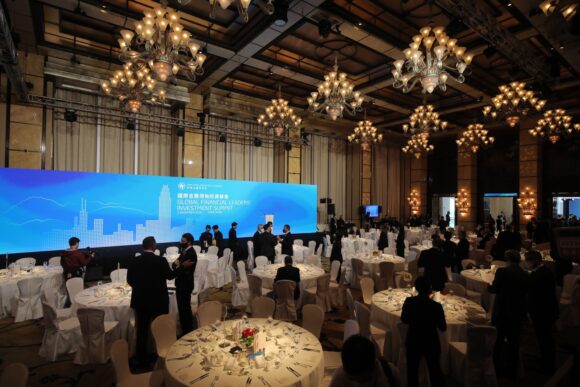 Hong Kong Exchanges & Clearing Ltd. scrapped afternoon trading of stocks and derivatives after the government raised the No. 8 storm signal — its third-highest warning. The halt came as the Hang Seng Index had its best two-day gain in seven months. Schools were also suspended and workers were advised to go home.

Being affected by a tropical cyclone so late in the year is a rarity for Hong Kong, which had only raised the No. 8 signal a handful of times in November since 1946. The storm approached as more than 200 financiers gathered in the Four Seasons hotel ballroom for a summit designed to revive Hong Kong’s status as an international finance hub. The conference, attended by Goldman Sachs Group Inc.’s David Solomon and Morgan Stanley’s James Gorman, wasn’t affected.

Nalgae, which means “wings” in Korean will edge closer to Hong Kong on Wednesday evening than previously forecast to skirt within 100 km of the city, the local observatory said. At 4 p.m., Nalgae was centered about 140 km southeast of the city and was forecast to move northwest at about 10 kilometres per hour, it said, adding that the no 8 signal will remain in force before 6 p.m.

The summit continues on Thursday, when top fund managers including Carlyle Group Inc. founder Bill Conway and Man Group Plc’s Chief Executive Officer Luke Ellis take part in a forum at the main hall at the stock exchange. There are two panels, entitled “Creating Value Through Uncertainties” and “Managing Through Volatile Markets.”

The Hang Seng Index closed 2.4% higher, adding to Tuesday’s 5.2% gain which was triggered by unverified talk of a shift in Xi Jinping’s Covid Zero policy.

Hong Kong is typically hit by about six typhoons annually, usually from June to October, but only a fraction of those result in market or school closures. The last time was in late August, when tropical storm Ma-on hit the city.