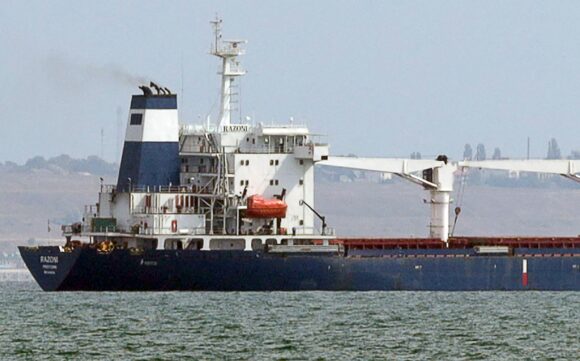 Ships brought grain from Ukrainian ports on Monday, suggesting Moscow had stopped short of reimposing a blockade that might have caused world hunger, despite suspending its participation in a U.N. program to safely export grain from the war zone.

Air raid sirens blared across Ukraine and explosions rang out in Kyiv sending black smoke into the sky as Russia rained missiles down in renewed air attacks. Ukrainian officials said energy infrastructure was hit, knocking out power supplies. (Editor’s note: Ascot announced that insurance on shipments, which were quoted last week, will be valid for seven days, according to a separate news alert from Reuters).

Ukraine’s military said it had shot down 44 of 50 Russian missiles. But strikes on the pumping system for the capital left 80 percent of Kyiv without running water, authorities said, adding they hoped to restore it quickly. Two people were reported injured in the Kyiv region.

“[I]t was not immediately clear whether shipments would be interrupted again beyond Monday, including whether insurers would allow further vessels to sail.”

Still, the resumption of food exports from Ukrainian ports suggested that at least one dire scenario had been averted for now. International officials had feared that Moscow would reimpose a blockade on Ukrainian grain, after Russia announced on Saturday that it was suspending its role in the U.N.-backed program that escorts cargo ships through the Black Sea.

“Civilian cargo ships can never be a military target or held hostage. The food must flow,” tweeted Amir Abdullah, the U.N. official who coordinates the program.

Shortly after, Ukraine confirmed that 12 ships had set sail. The 354,500 tonnes of grain they carried was the most in a day since the program began, suggesting a backlog was being cleared after exports were interrupted on Sunday.

But it was not immediately clear whether shipments would be interrupted again beyond Monday, including whether insurers would allow further vessels to sail.

“Instead of fighting on the battlefield, Russia fights civilians,” Foreign Minister Dmytro Kuleba said. “Don’t justify these attacks by calling them a ‘response’. Russia does this because it still has the missiles and the will to kill Ukrainians.”

The U.S. ambassador to Kyiv, Bridget Brink, tweeted: “Like millions of Ukrainians, our @USEmbassyKyiv team is once again taking shelter as Russia continues its callous and barbaric missile strikes on the people of Ukraine in an effort to leave the country cold and dark as we approach winter.”

For the past three weeks, Russia has been conducting a campaign of attacks on Ukrainian civil infrastructure using expensive long-range missiles and cheap Iranian-made “suicide drones” that fly at a target and detonate.

Moscow said it was forced to pull out of the Black Sea grain shipping deal after blaming Kyiv for blasts that damaged Russian navy ships in the Crimean port of Sevastopol on Saturday.

Ukraine has neither confirmed nor denied it was behind the explosions that hit the Crimea base of Russia’s Black Sea Fleet, but says Russia’s navy is a legitimate military target. Moscow said the blasts were caused by a wave of sea and air drones.

After Russia suspended its participation in the grain shipping program at the weekend, the United States accused Russia of using food as a weapon. Ukrainian President Volodymyr Zelenskiy said Moscow was “blackmailing the world with hunger.” Russia denies that is its aim.

Kremlin spokesman Dmitry Peskov said the U.N. brokered deal was “hardly feasible” because Russia could no longer guarantee the safety of shipping. He did not specify why shipments would now be unsafe, and declined to say under what conditions Moscow might rejoin the arrangement.

But Monday’s resumption of Ukrainian grain shipments suggested that Moscow was stopping short of attempting to impose a new blockade.

Ukraine and Russia are both among the world’s largest exporters of food. For three months, the U.N.-backed deal has guaranteed Ukrainian exports can reach markets, lifting a Russian de facto blockade on Ukraine. The news that Moscow was pulling out of the deal had sent global wheat prices soaring by more than 5% on Monday morning.

The ships that sailed on Monday included one hired by the U.N. World Food Programme to bring 40,000 tonnes of grain to drought-hit Africa.

“Even if Russia behaves hesitantly because it didn’t receive the same benefits, we will continue decisively our efforts to serve humanity,” Turkish President Tayyip Erdogan, who helped mediate the grain deal, said in a speech.

“Our effort to deliver this wheat to countries facing the threat of starvation is evident. With the joint mechanism that we established in Istanbul, we contributed to the relief of a global food crisis,” he said.