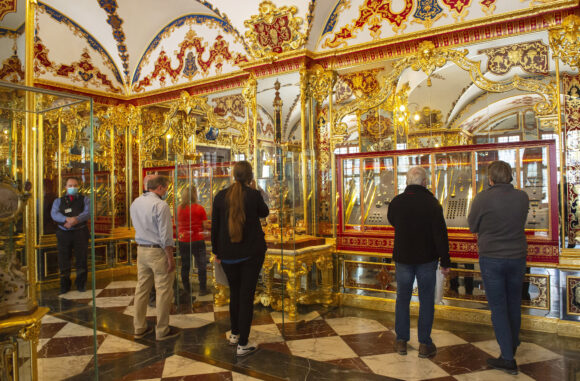 German authorities said Saturday that they have recovered a significant part of the 18th-century treasures stolen from Dresden’s Green Vault museum in a spectacular break-in more than three years ago.

Prosecutors and police said in a statement that they secured 31 items in Berlin overnight, including “several pieces that appear to be complete.” They were taken to Dresden, more than 160 kilometers (100 miles) away, where police and then officials from the authority that oversees the city’s art collections plan to check their authenticity and examine whether they are intact.

Saturday’s statement gave no details of where exactly the items were found and in what circumstances.

But they said that the find was preceded by exploratory talks between prosecutors and the defense in an ongoing trial over the theft on a possible agreement that would include the return of stolen items. They added that they can give no further information ahead of the next trial session scheduled for Tuesday.

Six men went on trial in Dresden in January, accused of gang robbery and arson over the Nov. 25, 2019, robbery. The German nationals were accused of stealing jewelry with a total insured value of at least 113.8 million euros ($121 million).

Officials said at the time that the items taken included a large diamond brooch and a diamond epaulette. The treasury of Augustus the Strong of Saxony was established in 1723 and contains around 4,000 objects of gold, precious stones and other materials on display in Dresden’s Royal Palace.

Prosecutors have said that the suspects laid a fire just before the break-in to cut the power supply for streetlights outside the museum, and also set fire to a car in a nearby garage before fleeing to Berlin.

Saxony’s regional culture minister, Barbara Klepsch, said officials are waiting to see experts’ assessment and discover what condition the recovered pieces are in.

“I remain hopeful that the wound opened in the historic Green Vault in the 2019 robbery will soon be closed,” Klepsch said in a statement. “This shows that, even three years after this painful break-in, it is worth not giving up hope and pursuing all tracks that arise.”

Photograph: Visitors stand in the Jewel Room during the reopening of the Green Vault Museum in Dresden’s Royal Palace of the Dresden State Art Collections (SKD) in Dresden, Germany, on May 30, 2020. German authorities said Saturday Dec. 17, 2022, that they have recovered a significant part of the 18th-century treasures stolen from Dresden’s Green Vault museum in a spectacular break-in more than three years ago. (AP Photo/Jens Meyer, file)