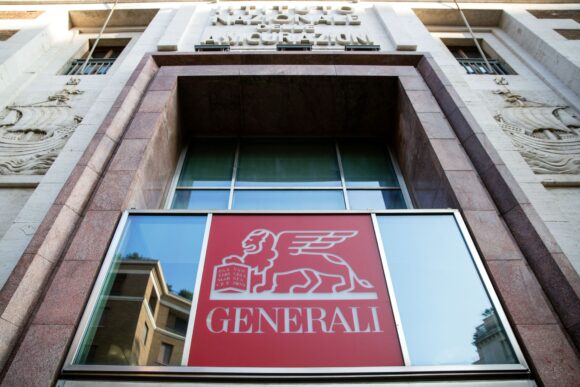 Assicurazioni Generali SpA is exploring a deal with US investment firm Guggenheim Partners to bolster its asset management business, according to people familiar with the matter.

Italy’s biggest insurer has held informal talks on options ranging from a full acquisition of Guggenheim’s asset management business to a partnership or strategic investment, the people said, asking not to be identified as the discussions are private.

Generali has considered selling its Banca Generali unit to Mediobanca SpA among options to help finance a potential deal, some of the people said. There aren’t any live talks now, they added.

The considerations are at an early stage, talks have been on-and-off again and may not lead to a transaction, according to the people. Generali could also end up pursuing another asset management target in the US, some of the people said.

Banca Generali shares were suspended limit up in Milan after gaining 6.2%, while Mediobanca rose by a similar amount. Generali gained 1.4% after the Bloomberg report.

“From time to time, we have inquiries and even discussions with third parties who want to consider joint ventures or who seek to make capital investments in our firm,” Guggenheim spokesman Gerard Carney said. “We do not comment on these conversations which occur routinely, and often more than one at a time.”

Generali, which earlier declined to comment, said that it was asked to clarify its position by Consob, the Italian markets regulator. The firm “is assessing potential M&A opportunities on a continuous basis,” it said, adding that “to date no decision has been made to proceed with any such transaction.”

A spokesperson for Mediobanca, the insurer’s biggest shareholder, declined to comment.

Generali Chief Executive Officer Philippe Donnet is seeking expansion of the asset management arm, which accounts for less than 12% of group profits, as part of his latest strategic plan. Since 2017, the insurer has bought France’s Sycomore Asset Management to boost its offering of environmental and socially responsible funds and Lumyna, a London-based alternative asset management unit of Bank of America.

Generali asset and wealth management head Carlo Trabattoni said earlier this year that the firm is seeking to purchase firms specialized in US credit markets and renewable energy having as much as 70 billion euros ($68 billion) of assets under management.

A deal with Guggenheim would be much bigger than that. The firm, which traces its roots back to lead and silver mining in Colorado in the late 1880s, manages more than $228 billion of assets across fixed income, equity and alternative strategies as of the end of June, according to its website.

Generali Investments managed about 575 billion euros at the end of 2021. It operates through 1,200 asset managers and specialists in more than 20 countries. The unit has added more than 100 billion euros of assets from third parties in the last 3 years. Generali is seeking annual revenue growth of more than 7% for the unit over the next couple of years.

–With assistance from Jan-Henrik Förster

Photograph: An Assicurazioni Generali SpA logo sits above an entrance to its offices in Rome, Italy, on Friday, Jan. 27, 2017. Photo credit: Alessia Pierdomenico/Bloomberg