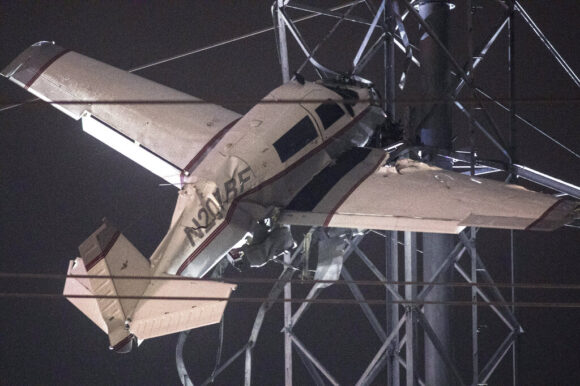 GAITHERSBURG, Md. (AP) — A small plane that crashed into a Maryland electricity transmission tower last month was flying below minimum altitudes while approaching an airport in foggy nighttime conditions, according to a preliminary report on the crash.

The pilot and passenger were seriously injured and the Mooney M20J was substantially damaged when it hit a tower supporting high-tension lines on Nov. 27, knocking out power to tens of thousands of area customers. The plane was left dangling 100 feet (30 meters) above the ground, according to the National Transportation Safety Board’s preliminary report released Monday.

The report includes factual information but not a probable cause. That is typically included in a final report, which could take a year or two to complete, according to the NTSB.

The plane was operating on an instrument flight rules flight plan, which is typically used during reduced visibility, as it returned to the Montgomery County Airpark in Gaithersburg from White Plains, New York, the report states. Visibility in the fog was 1.25 miles (2 kilometers).

Air traffic control communications showed that the pilot, identified by state police as Patrick Merkle, 66, of Washington, D.C., was advised to expect one approach procedure, but he preferred another, the report states. An air traffic controller directed Merkle to a spot about 13 miles (21 kilometers) from the airport, but the plane made a wrong turn.

As the controller provided numerous course corrections, the pilot made a “series of left and right turns, near course reversals, or continued established headings as the controller repeatedly requested that the pilot turn to a different heading.” At one point, he told the controller that he had entered the wrong waypoint into his system and was correcting it, the report states. Around that time, another airplane asked to be diverted to another airport because of reduced visibility.

Merkle and the passenger were stranded in the aircraft for more than six hours, until crews secured the plane to the tower, officials said.

While they waited to be rescued, Merkle told 911 call center personnel, “I got down a little lower than I should have . I thought I was closer to the airport than I was . We could see the ground, but we couldn’t see in front,” the report states.

Merkle described the fog in interviews with local media as “pea soup” and “expressed concerns about his altimeter,” but a test found that it was “well within the test allowable error at all ranges,” the report states.

Merkle told The Washington Post on Tuesday that he hadn’t seen the report and was set to issue an accident report to investigators on Wednesday.