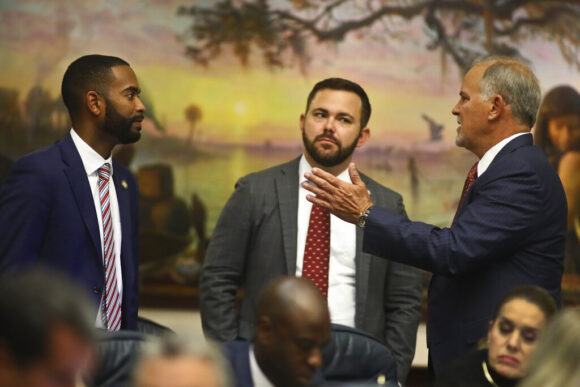 Florida Gov. Ron DeSantis signed a sweeping property insurance bill on Friday. How much and when it will work to stabilize the stormy market are among the questions being asked.

One of the key goals of the legislation is to keep the claims process from ending up being settled in courtrooms, a problem that DeSantis said drives up legal costs for insurers.

“This bill reins in the incentive to litigate,” DeSantis said before signing the bill in Fort Myers, an area devastated by Hurricane Ian in September. “This is going to make a huge, huge difference.”

Florida has struggled to keep the insurance market healthy since 1992 when Hurricane Andrew flattened Homestead, wiped out some insurance carriers and left many remaining companies fearful to write or renew policies in Florida. Risks for carriers have also been growing as climate change increases the strength of hurricanes and the intensity of rainstorms.

But beyond being prone to hurricanes, Florida needs to reduce legal costs for insurers, DeSantis said.

“Florida’s property insurance market was very good for lawyers. Very good. It’s made a lot of people very, very rich. But the question is, is that in your best interest to have a situation like that? And I don’t think it is,” DeSantis said.

The Bill Signed by Governor
The draft of the measure was revealed Friday evening, Dec. 9. By Tuesday, Dec. 13, the full Senate voted mostly along party lines, 27-13, to endorse it, with no amendments. On Wednesday, the House approved it 84-33. Most provisions will take effect immediately upon the signing of the bill into law.
Lawmakers and insurance groups cautioned that it could still be another two years before remedial effects of the legislation are fully realized.

The new law will create a $1 billion reinsurance fund, put disincentives in place to prevent frivolous lawsuits and force some customers to leave a state-created insurer of last resort, Citizens Property insurance, for a private insurer, even if the policy costs more. It will also set more stringent deadlines throughout the claims process to try to insure homeowners don’t face coverage delays.

Mimi Bright of Parkland said she isn’t expecting relief for policyholders any time soon, but she’s glad that lawmakers are addressing the subject.

Bright’s home insurance premiums jumped from about $4,600 a year to nearly $8,000 after her carrier went out of business and she had to switch to the Citizens. She said she’s concerned about the new bill’s provision that could force a homeowner to accept a policy from a private insurer even if it’s more expensive.

“So much for protecting the consumer, right?” Bright said.

Average annual premiums have risen to more than $4,200 in Florida, which is triple the national average. About 12% of homeowners in the state don’t have property insurance, compared to the national average of 5%, according to the Insurance Information Institute, a research organization funded by the insurance industry.

The insurance industry has seen two straight years of net underwriting losses exceeding $1 billion in Florida. Six insurers have gone insolvent this year, while others are leaving the state.

But Democrats opposed the bill, saying it doesn’t do anything to help stop huge rate increases and cancellations that homeowners are struggling with.

It will also eliminate the state’s assignment of benefits laws, in which property owners sign over their claims to contractors who then handle proceedings with insurance companies.

The bill would force people with Citizens policies to pay for flood insurance and require moves to private insurers if they offer a policy up to 20% more expensive than Citizens. Citizens recently topped 1 million policyholders for the first time in a decade.

In a plus for consumers, it will also speed up deadlines for insurance companies to respond to and act on claims. To help at a time when companies are slammed with claims, the law allows insurers to begin the claims process through video, photos and teleconferences rather than sending an agent to every damaged property.

The new law comes as Insurance Commissioner David Altmaier steps down from his position. DeSantis said Friday the position has already been posted.

DeSantis also signed a bill to provide property tax rebates to people whose homes were left uninhabitable by Ian. The bill also provides money for recovery.