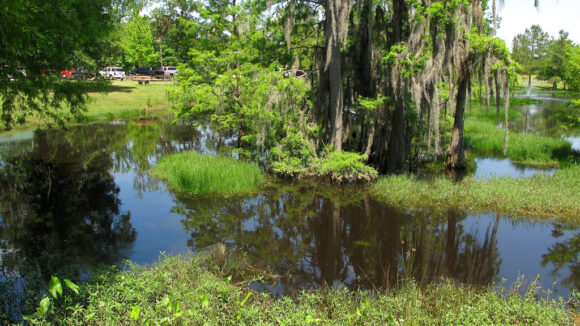 An environmental group took the first step Wednesday toward filing suit over plans by Alabama Power Co. to leave millions of pounds of coal ash near a riverside within the vast Mobile-Tensaw Delta, which activists say could be devastated by a spill.

The Virginia-based Southern Environmental Law Center sent the utility notice of its intent to sue on behalf of Mobile Baykeeper, an environmental advocacy organization. Baykeeper wants regulators to force the company to take additional steps to protect against a spill of ash, a waste product from burning coal, at the site of its Plant Barry near the Mobile River. Such notices are required under the law before a lawsuit can be filed.

Mobile Baykeeper contends the ash pond contains 21 million pounds (9.5 million kilograms) of coal ash that is polluting groundwater and could wipe out the lush, biologically diverse region should it be breached by heavy flooding, a hurricane or some other disaster.

The company’s plan for the coal ash “jeopardizes so much of what makes coastal Alabama special,” Cade Kistler of Mobile Baykeeper said in a statement.

“The Mobile-Tensaw Delta is one of the world’s most important resources, and is vulnerable to increasing floods, severe hurricanes, and rising water levels. Leaving millions of tons of coal ash on the banks of the Mobile River is a disaster waiting to happen,” said Kistler.

Plant Barry opened in 1965 about 25 miles (40 kilometers) north of Mobile. With federal regulators imposing tougher rules on storing coal ash, the company has been working for several years to close the roughly 600-acre (243-hectare) pond by drying it out, moving material to a smaller site nearby and covering it with a liner.

The company contends moving the material farther away would pose a hazard in itself.

Environmentalists contend the plan doesn’t meet regulations and could result in contamination of the sprawling delta wilderness area north of the port city. Utilities in other states are acting to prevent coal ash spills like one that happened in Tennessee in 2008 and Virginia in 2014, they said.

“Alabama is an outlier when it comes to leaving toxic coal ash in place,” Barry Brock, director of Southern Environmental Law Center’s Alabama office, said in a statement. “This coal ash should be safely stored in a lined facility away from the river’s edge and out of the groundwater or recycled into cement and concrete, as is being done in other Southeastern states.”