Ukraine finally secured a deal aimed at restarting crucial Black Sea grain exports that have been crippled by Russia’s invasion. But getting them going won’t be easy.

Government officials from Kyiv and Moscow on Friday signed parallel agreements with Turkey and the United Nations at a meeting in Istanbul intended to help revive shipments from one of the world’s top wheat, corn and vegetable-oil exporters. That could be good news for a strained global food market and Ukraine’s economy that’s been wrecked by the war.

Yet even now with the accord, it will take time for traders and officials to kick-start the flows. Ukraine faces the task of clearing a pathway in mined seas, finding enough ships to carry the backlogged grain and re-routing trains and trucks that are now being used elsewhere. Getting insurance to cover operations is a challenge, too.

The plan’s success also hinges on Moscow’s security assurances and President Vladimir Putin living up to his side of the bargain, at a time when the Kremlin is moving to annex occupied lands and continues to advance in Ukraine’s east. Analysts and western officials are skeptical over how quickly Ukraine can resume its role as a global agricultural powerhouse.

“While active military operations are taking place on the territory of Ukraine, being in the waters of Ukrainian ports will remain extremely dangerous,” said Andriy Kupchenko, head of analytics at local consultant APK-Inform. Ukraine’s exports are unlikely to return to “optimal” levels this season, he said.

In a sign of how strained the situation is, Ukraine signed an agreement with Turkey and the UN, rather than directly with Russia — with Russia mirroring an accord with Turkey and the UN. President Volodymyr Zelenskiy’s chief of staff said earlier that Ukraine won’t allow escorts by Russian ships or have its representatives in Ukraine’s ports. Russian Defense Minister Sergei Shoigu said on state TV Friday that Russia wouldn’t take advantage of the fact that the ports will be opened.

Scores of crop vessels have been stuck in Ukraine since the war began, forcing the country to turn to rail and truck routes and river ports — which can handle much smaller volumes. When Black Sea ports reopen, securing ships and finding insurers willing to back up cargoes heading there could prove difficult and expensive.

Specialist insurers may take on cargoes, especially given their humanitarian nature, said Neil Roberts, head of marine and aviation at Lloyd’s Market Association. But logistics details would need to be resolved to ensure workers are available to handle and load grain.

“Opening the ports would be fantastic, at least the 80 or 90 or so vessels stuck there can get out,” Lucas Dorrestein, the global head of operations at crop trader Viterra, said this week. “But then the next steps are going to be quite complicated.”

Ukraine had as much as 25 million tons of backlogged grain by mid-year and farmers are now in the midst of their next wheat harvest. While some supplies are at or near ports, farmers and traders will need safe routes to continue deliveries. The southern region remains dangerous and infrastructure has been damaged, which could limit progress, APK-Inform’s Kupchenko said.

Plus, many rail cars and trucks are tied up in queues exporting grain to European Union neighbors and would need to return to traditional port-bound routes, he said.

“Ensuring crew safety will be crucial if we are to get this agreement moving quickly,” said Guy Platten, secretary general of the International Chamber of Shipping. “Questions remain over how ships will navigate heavily mined waters, and how we can effectively crew the ships in the region.”

Keeping exports flowing also depends on assurances that there’ll be no infrastructure attacks by Russia, which has been accused of stealing Ukrainian grain and targeting storage facilities with missile strikes. Some officials believe the Kremlin is intent on using the threat of food shortages and global hunger as a bargaining tool.

The agreement concerns three of Ukraine’s ports — Odesa, Chernomorsk and Pivdennyi — UN Secretary-General Antonio Guterres said at a signing ceremony. They accounted for just over half of Ukraine’s seaborne grain exports in the 2020-21 season.

There are others that are also vital to achieving pre-war volumes. One is Mykolayiv near Kherson, where heavy fighting is currently concentrated, while Chornomorsk itself is blocked by deliberately sunken vessels. 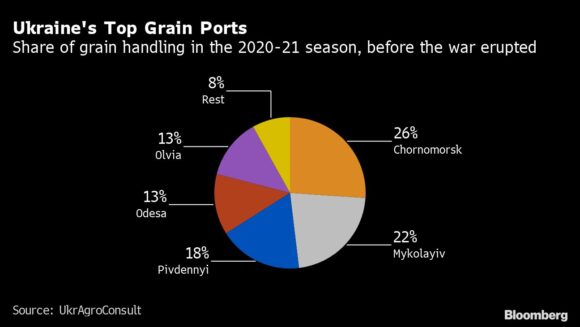 The International Maritime Organization has estimated completely removing sea mines near the ports would take months. However, clearing a path to allow vessels to transit might occur much faster, potentially taking about 10 days, Mykola Gorbachov, head of the Ukrainian Grain Association, said this week.

Boosting exports would offer relief to importing nations that depend on Ukrainian crops, especially with grain prices historically high. A deal would also give greater confidence to local farmers, who’ll face key decisions in autumn over how much area — if any — to plant with vital winter grains like wheat, which are in particularly tight global supply, Rabobank analyst Michael Magdovitz said.

“We’re hopeful that there can be some sort of arrangement to get that grain out of there,” John Kirby, a US National Security Council spokesman, said at a briefing. “But we’re not looking at it through rose-colored glasses in terms of the success that they’ll ultimately be able to achieve.”

–With assistance from Josh Wingrove.