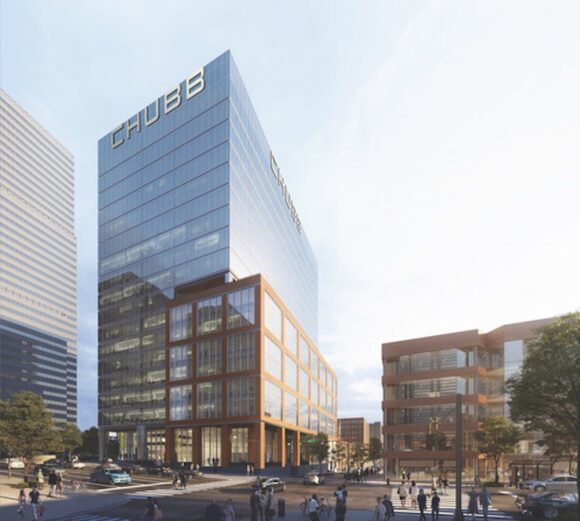 Chubb has announced plans for a new Philadelphia office that will occupy a state-of-the-art building to be constructed at 2000 Arch Street.

Designed with the highest standards for sustainability, the new 18-floor, 438,000 rentable square foot structure is being developed in partnership with Parkway Corporation. Construction will begin in February 2023.

Chubb said it will create at least 1,250 new positions in Philadelphia following the building’s opening in early 2026, making it the company’s largest office in North America. Chubb has committed to creating and retaining a total of 3,200 jobs in Pennsylvania within five years following the opening. During the construction phase, the project will also support hundreds of jobs from local unions, Chubb said.

The new location’s proximity to leading colleges and universities will provide an important talent pipeline, Chubb said. The insurer will also hire through its newly launched apprentice program, which will offer roles for individuals without a four-year college degree in areas such as claims, underwriting and technology.

The Redevelopment Assistance Capital Program (RACP), provided by the Commonwealth and facilitated by the Philadelphia Industrial Development Corporation, is providing $10 million to fund development and construction costs of the project. Chubb will be the anchor tenant.

Chubb “is proud to put a new stake in the ground in Philadelphia, a city that has been part of our history and success since 1792,” said John Keogh, Chubb’s president and chief operating officer. “We believe in this city, its people and the opportunity it provides. Our expanded presence will bring economic benefits to the City and Commonwealth, including new jobs and stimulating broader economic activity. The strong support Chubb is receiving from Governor Wolf, Mayor Kenney, City Council President Clarke and our development partner is a testament to the sense of community that continues to make Philadelphia a great place to do business.”