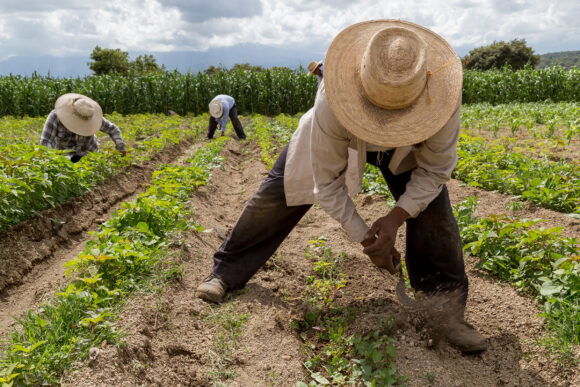 A broadly smiling California Gov. Gavin Newsom joined about two dozen jubilant, cheering farmworkers camped outside the state Capitol this week to sign one of the most contentious bills before him this year, reversing course on a measure to help farmworkers unionize after President Joe Biden and Vice President Kamala Harris supported it.

The White House support pinned Newsom in a difficult political position after his office announced before Democratic lawmakers sent him the bill that he would not sign it.

But Newsom approved the bill only after he, the United Farm Workers and the California Labor Federation agreed on clarifying language to be considered during next year’s legislative session to address his concerns around implementation and voting integrity.

The new law gives California farmworkers, who harvest much of the nation’s fruit and vegetables, new ways to vote in union elections beyond physical polling places on farm property. Proponents say that would help protect workers from union busting and other intimidation, while owners say such a system lacks necessary safeguards to prevent fraud.

The agreement includes a cap on the number of unionization petitions over the next five years and will allow state regulators to better protect worker confidentiality and safety, Newsom’s office said. It would do away with an option for workers to unionize through mail-in voting that is contained in the current language, but keeps a “card check” election process.

“Si, se puede,” the farmworkers chanted as Newsom signed the bill, echoing the UFW’s longtime slogan – roughly, “Yes, we can” in Spanish.

The union led a weekslong summer march up the state to Sacramento, where farmworkers and their supporters rallied outside the Capitol, some camping outside through September in an effort to win Newsom’s support.

“The vigil and the march were all worth it, because he came out and signed for us,” farmworker Teresa Maldonado said through a translator.

The march cost Xochilt Nunez her fruit-picking job, several toenails and left her with blistered feet. But she was on the verge of tears after Newsom signed the legislation, plus an extra copy for Nunez to keep.

“California’s farmworkers are the lifeblood of our state, and they have the fundamental right to unionize and advocate for themselves in the workplace,” Newsom said in a statement after signing the bill.

Newsom vetoed similar legislation last year, as did his two most recent predecessors. One of his stated concerns centered on security concerns about mail-in elections, an option that would be eliminated in the clean up language agreed to by the union.

The revised law would keep the card check option, which would still give farmworkers a chance to “vote from home or anywhere else they feel comfortable” and limit chances for employer intimidation, said Giev Kashkooli, legislative and political director for the United Farm Workers. Under such a system, a union is formed if more than half of workers sign the authorization card.

The California Farm Bureau said it was “deeply disappointed” in Newsom’s decision to sign the bill, though the group’s statement focused primarily on the mail-in balloting system. The union did not immediately respond to an email seeking comment about the language to remove that option.

Democratic Assemblyman Mark Stone added provisions to this year’s version that would let the law expire after five years unless it is renewed by lawmakers, and requiring the Agricultural Labor Relations Board to handle the ballots.

Newsom has been positioning himself for months as a leading national Democratic voice calling out red state governors, fueling speculation that he has presidential ambitions despite his repeated denials.

Mike Madrid, a Republican strategist in California who specializes in Latino voting trends, read Biden’s Labor Day statement strongly supporting the legislation as an effort to take Newsom down a notch.

“I think it’s impossible to avoid the reality that there’s a little bit of tension between these two politicians because of Gavin’s posture in leaning into this presidential rumor mill,” Madrid said. “It’s basically just a reminder of who the sheriff is.”

Biden has long supported the union. He keeps a bust of union co-founder Cesar Chavez in the Oval Office and Chavez’ granddaughter, Julie Chavez Rodriguez, is Biden’s director of intergovernmental affairs.

“In the state with the largest population of farmworkers, the least we owe them is an easier path to make a free and fair choice to organize a union,” Biden said in his statement.

Jack Pitney, a political science professor at Claremont McKenna College, said Biden seemed to be reflecting his longstanding support for unions, while Newsom had the more delicate task of balancing labor relations against an agricultural industry that also is struggling.

Adding to the pressure, the struggling UFW recently rejoined the umbrella California Labor Federation. The issue of farmworker unionization became more critical to labor in 2020 after the U.S. Supreme Court ruled that union organizers had no right to access farmers’ properties to talk to their workers.