Lloyd’s of London predicts that England will beat Brazil and emerge victorious at the 2022 FIFA World Cup – with France, Argentina and Spain falling just behind.

Lloyd’s is going for a hat-trick of predictions, after correctly identifying Germany and France as winners in 2014 and 2018, respectively, by using a model that ranks the teams according to the collective insurable value of their players.

The assessment of each insurable value comprises a variety of metrics such as wages, sponsorships, age and on-field position, said Lloyd’s, noting that the research was published with the support of the Centre for Economics and Business Research (Cebr).

Using this methodology to play out the tournament in full, Lloyd’s model predicts England’s Three Lions will finish top of Group B, before securing knock-out wins against Senegal, France, Spain and Brazil. (The World Cup is scheduled to take place in Qatar from Nov. 20 to Dec. 18, 2022).

“As Lloyd’s goes for the hat-trick of correct World Cup predictions, we’re shining a spotlight on the need for protection at all levels of the game – professional and amateur – to help clubs, competitors and communities make braver decisions both on and off the pitch,” commented Bruce Carnegie-Brown, Lloyd’s chairman. 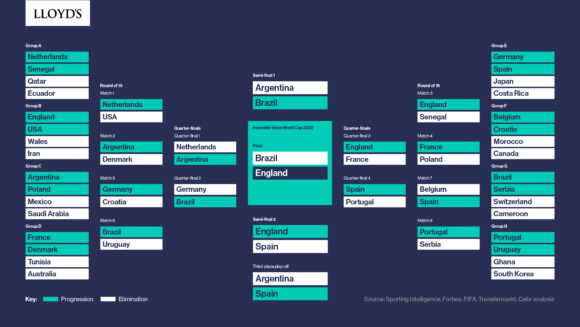 Other key findings of the research include:

Lloyd’s said the research is designed to emphasize the need for athletes at all levels and in all sports to consider insurance protection packages and coverage to increases resilience and provide security. On an annual basis, Lloyd’s writes over £150m in sports-related Accident and Health (A&H) policies.

The research was supported by Sporting Intelligence, which provided anonymized footballer salary data for each of the 32 teams participating in the 2022 FIFA World Cup, based upon an indicative 30-man squad for each nation.