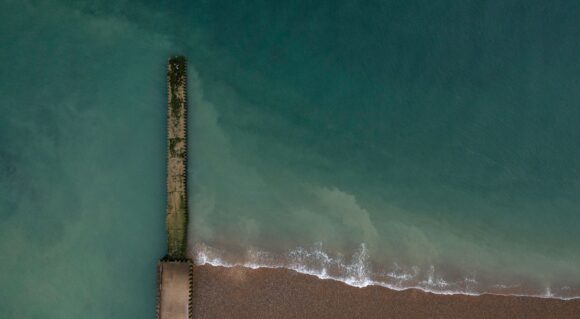 Raw sewage has been spilling into seawater in some parts of England and Wales over the past week after heavy rains overwhelmed sewer systems. The contaminated flows triggered new pollution risk warnings and advice against bathing from the Environment Agency in dozens of swimming spots. Popular beaches in places like Sussex and Devon had to close when wastewater reached shorelines.

England’s top health officials have called sewage discharges a “growing problem” and “a serious public health issue for government and regulators,” saying that water companies have to do more. Swimming or boating in water that contains human feces may put people at risk of developing gastrointestinal illnesses, as well as respiratory, skin, eye or ear infections. Sewage spills may also contain microplastics, which are increasingly being found in the marine food chain.

“It’s just the tip of the iceberg we’re seeing at the moment and there’ll be even more health challenges moving forward because of sewage pollution,” said Hugo Tagholm, chief executive officer at environmental campaign group Surfers Against Sewage.

Why Do Sewage Spills Happen?

The most common and least controversial sewer discharges happen when rain hits the road. That water goes into the storm drainage and then gets discharged straight into local streams.

Trouble can occur in areas with combined sewer systems, which carry water drained from surfaces as well as sewage flushed from homes and businesses, in one pipe. This sort of infrastructure is common in older UK cities, including London. Heavy storms can overwhelm these mixed systems. So to prevent raw sewage from flooding streets or homes, systems are designed to release extra untreated water — containing some human waste — into rivers.

While discharges into local waterways are meant to be a measure of last resort, there are concerns that they have become more common practice for some companies. “We have been clear that water companies’ reliance on overflows is unacceptable and they must significantly reduce how much sewage they discharge as a priority,” the UK Water Minister Steve Double said in a recent blog post.

Another problem is outdated infrastructure. The rule of thumb is that waste water treatment plants should be prepared to handle three to six times their so-called dry-weather flow, which is the equivalent of everyone “flushing their loos when there’s no rain or infiltration into pipes,” according to Barnaby Dobson, a research associate at Imperial College London. Dobson works as a water resource modeler on the Community Water Management for a Liveable London project funded by the UK’s Natural Environment Research Council. However, as cities continue to build up and population increases, more and more toilets are being flushed, which puts extra stress on wastewater systems that haven’t been updated.

Why can’t you take a dog on the beach BUT water companies can discharge sewage into the rivers/sea
— Soupdragon53 (@soupdragon53) Aug. 25, 2022

Water services have been under extra public scrutiny since the sector became privatized in England and Wales more than three decades ago. Critics have said the companies providing water and sewage services have been more focused on profits than customers’ needs, failing to upgrade facilities and relying on faulty sewage spill monitors.

The government and regulators are also being blamed for not compelling utilities to do more. Dobson said water companies would be more likely to budget for increasing plant capacity if water regulator Ofwat required them to do so.

I never thought I’d be having to check a sewage level map before planning for a couple of hours at the beach.
— Alistair Cope (@MrFattyC) Aug. 26, 2022

What Will It Take to Fix This?

In theory, zero sewage discharges are possible. In practice, the cost of that would be very high. An independent report commissioned by the UK government found that eliminating overflows by separating wastewater and storm water systems could cost between £350 billion and £600 billion — a plan that could raise household bills by an extra £569 to £999 per year. Instead, the report suggests a more reasonable aim of reducing overflows to times of exceptional rainfalls.

There are upgrades underway in the UK. London’s Thames Tideway Tunnel is expected to cost more than £4 billion before it’s completed in the next few years. The tunnel, known as the Super Sewer, will run 15.5 miles (25 kilometers) from east to west London and provide a much needed update to a system that was originally designed to serve four million people in Victorian times. London’s population is now closer to nine million. Thames Water, which will operate and manage the system, said the new tunnel will reduce sewage spills from more than 50 a year to only three or four.

Beyond massive engineering projects, Dobson said some go-to solutions for the industry right now include increasing treatment and temporary storage capacities at plants, and fixing leaks in sewer pipes.

Other longer term investments could focus on reducing the amount of storm water entering into the sewer system by, among other things, making paved areas more permeable. Still, while these ideas might be clever, they’re also expensive. Firefighter’s 10 Relatives, Including 3 Children, Among Victims in Fire He Battled $600K for Woman Attacked by Police Dog in California