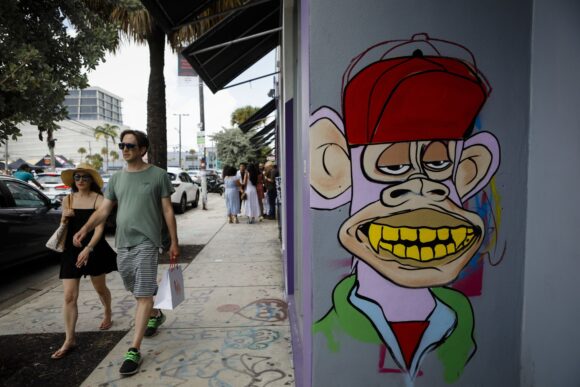 The creator of the popular Bored Ape Yacht Club collection of NFTs and its promoters, including Madonna, Paris Hilton and Justin Bieber, were sued by investors claiming they were duped into buying the collectibles by celebrities who didn’t disclose they were paid to pump sales.

The “promotional campaign was wildly successful, generating billions of dollars in sales and re-sales,” the investors said in the complaint, filed Friday in Los Angeles federal court. “The manufactured celebrity endorsements and misleading promotions regarding the launch of an entire BAYC ecosystem (the so-called Otherside metaverse) were able to artificially increase the interest in and price of the BAYC NFTs during the relevant period, causing investors to purchase these losing investments at drastically inflated prices.”

It’s the latest lawsuit to target celebrities for their promotions of digital financial products. At least three investor suits were filed following the implosion of FTX, targeting celebrities including Tom Brady and Stephen Curry for promoting the failed crypto exchange. Curry was sued by the BAYC investors, as were Gwyneth Paltrow, Kevin Hart and Serena Williams, among others.

The US Securities and Exchange Commission is investigating Yuga Labs over whether sales of its digital assets violate federal law and whether certain nonfungible tokens from the Miami-based company are more akin to stocks and should follow the same disclosure rules, Bloomberg reported in October.

“These claims are opportunistic and parasitic,” Yuga Labs said in an emailed statement, referring to the BAYC lawsuit. “We strongly believe that they are without merit, and look forward to proving as much.”

Oseary, who also represents Madonna, didn’t immediately respond to a request for comment.

At least one lawsuit over crypto promotions has failed.

Kim Kardashian and Floyd Mayweather Jr. were sued in Los Angeles over their promotion of the EthereumMax token, but Judge Michael W. Fitzgerald threw out the complaint Dec. 8, ruling the investors failed to allege facts showing that they paid more than the fair market value for their EMAX tokens when they bought them. Kardashian agreed to pay $1.26 million to settle SEC claims related to the promotions.

Also named in the BAYC complaint is FTX’s former head of commercial initiatives Amy Wu, who was on the board of Ape DAO, and served as a consultant and spokesman for the company.

“Wu utilized her relationships at crypto exchange FTX to recruit world champion athlete defendant Curry to solicit sales of the BAYC collection of NFTs,” the investors claimed. “None of these celebrity endorsements of BAYC NFTs disclosed the underlying financial interests and relationships involved.”

The BAYC investors cite a litany of promotions that they claim were misleading in the 94-page complaint, including Hilton’s appearance on the Jimmy Fallon show on NBC where both touted BAYC NFTs and Hilton’s follow-up Twitter posts. Fallon is also a defendant in the suit.

The Twitter posts “gave investors the false impression that Hilton: (1) actually bought the BAYC NFT; and (2) was enthusiastically ‘hanging out in the metaverse’ with Fallon and that they were ‘BoredApeBesties,”‘ the investors claim in the complaint. “In truth, Hilton was only promoting the BAYC NTFs and MoonPay because she was financially motivated to make those statements.”

Madonna was accused of giving a false impression in a newspaper article that quoted her saying she was upset over being beaten to a bid on a Bored Ape NFT.

Madonna’s “statements about her inability to obtain the BAYC NFT that was her first choice misleadingly suggested to investors that the Yuga securities were in such high demand and so exclusive that even a highly-connected celebrity” like her couldn’t get any one that she wanted.