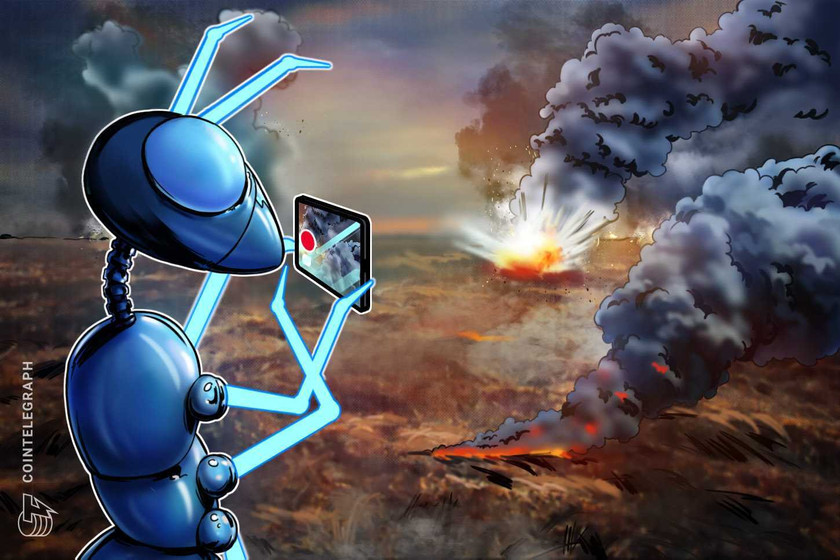 Erik Møse, chair for the Independent International Commission of Inquiry on Ukraine, stated in the UN’s article that “investigators visited 27 towns and settlements and interviewed more than 150 victims and witnesses.” Møse also noted that “sites of destruction, graves, places of detention and torture, as well as remnants of weapons,” were inspected.

While the report developed by the commission has allowed UN investigators to document war crimes in Ukraine, tools and protocols are still needed to enable individuals to accurately and securely report these acts. Additionally, the need to preserve war crime evidence has become critical as the War in Ukraine enters its seventh month.

Given these challenges, industry experts believe that blockchain technology has the potential to solve many of the issues faced by individuals and organizations documenting war crimes. For example, Jaya Klara Brekke, chief strategy officer at Nym — a platform powered by the Cosmos blockchain that protects the privacy of various applications — told Cointelegraph that Nym is developing a tool known as AnonDrop that will allow users to securely and anonymously upload data. She said:

“The intention is for AnonDrop to become a tool that democratizes the gathering of evidence that can be used to pursue human rights cases. In the current climate in Ukraine, this would be particularly important for the purpose of securely documenting and sharing evidence of war crimes anonymously.”

“The core technology of Nym is a mixnet, which takes data from ordinary users and mixes it together using encryption to make everything look identical. It protects against people watching the network, along with metadata surveillance and IP tracing,” she elaborated. While Nym provides an anonymity layer to allow users to transmit data without revealing who they are, information then gets stored on the decentralized storage network, Filecoin.

Will Scott, a software engineer at Protocol Labs — a company working with Filecoin on its decentralized storage solution — told Cointelegraph that some of humanity’s most important information is stored on Filecoin to ensure that data remains publicly available.

Recent: Are decentralized digital identities the future or just a niche use case?

A blockchain network combined with decentralized storage could be a critical tool for documenting war crimes since it allows individuals in regions like Ukraine to anonymously report, share and retain data. A Wall Street Journal article published in May 2022 stated that “Prosecutors say that, with Russian forces having occupied so much of the country, it is impossible to process all of the evidence of every potential war crime.” Moreover, Ahmed Ghappour, Nym general counsel and associate professor of law at Boston University, told Cointelegraph that it’s becoming critical for witnesses of human rights violations to come forward without fear of retaliation. He said:

“In Ukraine, where witnesses of war crimes are facing a technologically sophisticated adversary, network level anonymity is the only way to guarantee the safety and security needed to provide evidence to prosecute perpetrators.”

A work in progress

Although the potential behind AnonDrop is evident, Klara Brekke noted that the solution is still in its early development stages. “We took part in the Kyiv Tech Summit Hackathon this year hoping to find individuals who could help us extend AnonDrop’s functionality. For instance, AnonDrop’s user interface is not fully up yet and we still need to find a way to verify the authenticity of images uploaded to the network,” she explained.

Ghappour elaborated that verification is the next critical requirement for making sure evidence uploaded to the Nym network can be used in court. “I think one of Russia’s greatest strengths in this war is the region’s ability to deny that any evidence is valid. Russia’s use of deepfakes and misinformation is another strength. We need to guard against these attacks.”

In order to combat this, Ghappour mentioned that image providence features must be implemented within AnonDrop to enable easy verification when documents are examined in a court of law. Even though such processes for image verification currently exist through tools like SecureDrop — a solution that allows individuals to upload photos anonymously for media outlets to use — Ghappour believes that these are limited to siloed organizations.

“We want to take image verification a step further by democratizing the process, ensuring this feature is available to users rather than just media outlets.”

Once image providence is implemented, verifying war crimes could become easier for court officials. Brittany Kaiser, a human rights legal expert, told Cointelegraph that she believes such a tool could help advance the human rights documentation space, where often individuals feel too at risk to submit findings themselves.

“Through images alone, it is possible to verify typical indicators of atrocity crime, including, but not limited to, mass graves, torture marks, binding of hands, executions and other violations of international human rights law that amount to war crimes or other atrocity classifications,” she remarked.

Given the potential for this use case, it shouldn’t come as a surprise that AnonDrop isn’t the only blockchain application focused on the preservation and verification of war crimes. Starling Labs — a Stanford-based research lab focused on data integrity using cryptography and decentralized web protocols — is also using blockchain technology to report war crimes. However, verifying the integrity of data remains the biggest challenge for both Nym and Starling Labs, even with image providence in place.

For instance, Scott pointed out that progress must be made in order to make sure images are legitimate and that verification works well. He further remarked that access to the internet in various regions of Ukraine is censored: “There are distribution questions that are important to consider here.”

Challenges aside, it’s notable that organizations responsible for prosecuting war crimes are considering using technology to help advance traditional processes. For example, The International Criminal Court (ICC) in The Hague noted in its strategic plan for 2016 to 2018 that it could “support the identification, collection and presentation of evidence through technology.”

The report further noted that the ICC is interested in developing partnerships with non-governmental organizations and academic institutions to facilitate the use of technological advancements for war crime documentation. In the meantime, Ghappour emphasized that Nym will continue to push forward with enabling AnonDrop to be used in regions like Ukraine: “Russia has prolonged wars in the past, so we need to progress with this project no matter what.”