Australian employers are failing to narrow the pay gap between men and women, with finance firms among the worst offenders.

Females earned 22.8% less than males, the first time that progress has stalled since the government Workplace Gender Equality Agency began to collect the data in 2013, a report showed Monday.

“It’s very disturbing and disappointing, in terms of the progress,” WGEA director Mary Wooldridge said in an interview. “It needs to serve as a call out to all employers that we need to do better.” 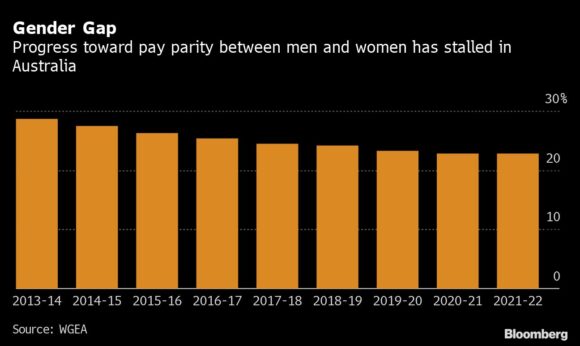 The financial and insurance services industry’s 28.6% gap ranked it second behind the construction sector in terms of pay disparity.

Discrimination and bias in hiring as well as for decisions on compensation are partly to blame for the nation’s pay disparity, according to the WGEA report. They’re part of a slew of other factors that impact the gap, such as having more men in senior management roles who tend to receive bigger bonuses and a large proportion of women in lower paid education and healthcare jobs.

Australia requires companies with more than 100 workers to provide information annually, though individual firms’ results aren’t published. In the US, Citigroup Inc. last year became one of the first big firms to disclose an unadjusted pay gap for its staff, while the UK since 2018 has mandated reporting on wage differences.

The WGEA data is based on employer reports from April 1 last year through to March 31 this year, covering 4,795 reporting organizations and almost 4.5 million employees.

Still, Australia has faired well relative to many other countries, Wooldridge said.

“Both Canada and New Zealand, which are good countries to compare to, have actually had slight increases in their gender pay gap over the last 12 months,” Wooldridge said. “You could nearly say it’s good that we’ve only stalled and that we haven’t increased,” adding that more women in leadership executive positions on boards is good for business outcomes. 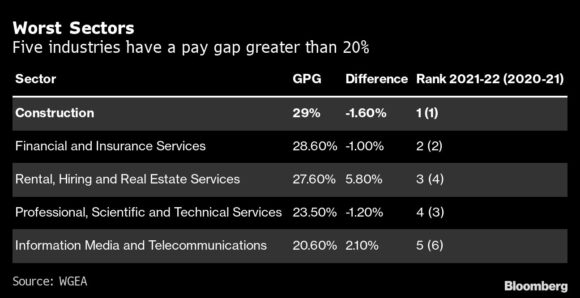 Meantime, men still disproportionately hold management positions, even in female-dominated industries. Only one in five company boards were gender balanced, and 22% of boards featured no women, according to the report.

The lack of progress comes despite concerted efforts to improve workplace representation and equality, such as the 30% Club and the 40:40 Vision, which pension fund Hesta set up to promote gender diversity in leadership in the 300 biggest publicly listed companies.

Deloitte Australia managing partner Pip Dexter said while the WGEA results were disappointing, the report would pressure organizations to take action. Deloitte had increased its representation of women at partner level by 2% each year, and now 33% of partner positions were held by women, said Dexter, who runs the executive team’s workforce, talent and diversity, equity and inclusion program.

“If you stop talking about things, then people stop working on them and then they may actually get worse,” Dexter said. “It creates a bit of peer pressure amongst organizations and peer pressure is a powerful way to get behavioral change.”