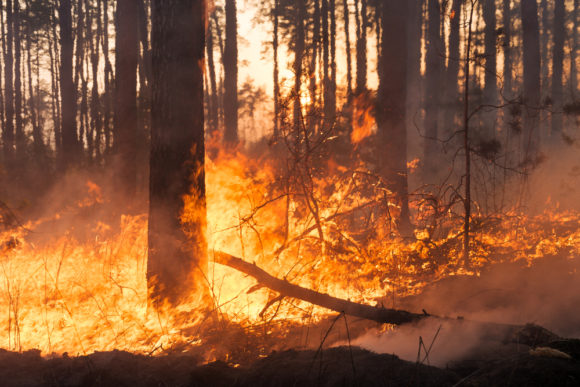 Alaska is burning this year in ways rarely or ever seen, from the largest wildfire in a typically mainly fireproof southwest region to a pair of blazes that ripped through forests and produced smoke that blew hundreds of miles to the Bering Sea community of Nome, where the normally crystal clear air was pushed into the extremely unhealthy category.

Already more than 530 wildfires have burned an area the size of Connecticut and the usual worst of the fire season lays ahead. While little property has burned, some residents have been forced to evacuate and one person was killed – a helicopter pilot died last month when he crashed while attempting to carry a load of equipment for firefighters.

In 2004, the acreage burned by mid-July was about the same as now, But by the time that fire season ended, 10,156 square miles were charred.

“The frequency of these big seasons has doubled from what it was in the second half of the 20th century,” said Rick Thoman, a climate specialist with the Alaska Center for Climate Assessment and Policy at the University of Alaska’s International Arctic Research Center. “And there’s no reason to think that’s not going to continue.”

Heat waves and droughts, which are exacerbated by a warming climate, are making wildfires more frequent, destructive, and harder to fight in many places. This month, wildfires have torn through Portugal, Spain, France, England and Germany, which have seen record-high temperatures.

California has recorded its largest, most destructive and deadliest wildfires in the last five years and with the state deep in drought authorities are girding for what may be a late summer and fall filled with smoke and flames.

Alaska, the nation’s largest state, also has been dry. Parts saw an early snow melt and then a largely rain-free June that dried out the duff layer – the band of decaying moss and grasses that blankets the floors of boreal forests and the tundra. This organic matter can be up to 2 feet thick but in various stages of decay.

On May 31, a lightning strike on the duff layer in the Yukon-Kuskokwim Delta started the East Fork fire, an area in southwest Alaska that rarely burns. Two communities with a combined population of about 700 were threatened but no mandatory evacuations were ordered in what became the largest wildfire ever in the delta at 259 square miles. Firefighters were able to protect the communities.

A fire like that one was directly attributable to climate change, Thoman said. There’s more vegetation growing on the tundra, willow and alder trees are thicker in the transition area between the tundra and forests, and spruce along river valleys are growing thicker and moving farther uphill from those valleys.

“There’s been a significant increase in the amount of fuel available, and that’s from decades of warmer springs and summers in the region, direct result of a warming climate,” he said. “And, of course, fires with more fuels available burn hotter. They burn longer. They’re more resistant to changes in weather.”

In Alaska, a little more than half of all wildfires are started by lightning and the rest are caused by humans accidentally, intentionally or through negligence. Of the 4,687 square miles burned so far this year, only 2 square miles have been from human-caused fires.

It isn’t feasible or necessary to try to fight all Alaskan wildfires. Fire play a key role in the state’s ecology by cleaning out low-lying debris, thinning trees and renewing habitats for plants and animals, so Alaska typically lets most burn themselves out or wait until rain and snow does the job. Firefighting resources are used to battle fires in populated areas.

So far this year, there’s been about 145,000 lightning strikes in Alaska and adjacent areas of Canada, as counted by the Bureau of Land Management’s lightning detection network. A staggering 42% occurred between July 5-11 when weather systems produced rain but about 50 fires also were started.

“Having concentrated lightning, where we get a significant fraction of the entire season’s lightning in a row in a few days, that’s actually fairly typical for Alaska lightning,” Thoman said. “Lots of lightning in that concentrated area that did spark quite a few fires in areas that had not had fires up to that point.”

While there’s been little loss of property, smoke from the fires has caused dangerous breathing conditions. In one case, two fires burning near Lake Iliamna joined and in one day burned about 75 square miles of boreal forest, creating smoke and ash that strong winds transported hundreds of miles northwest to Nome, pushing the air quality index into the extremely unhealthy category.

“I would never have thought that you could get that poor of air quality back 400 miles from the active fires, and that is a testament to how hot those fires were,” Thoman said.