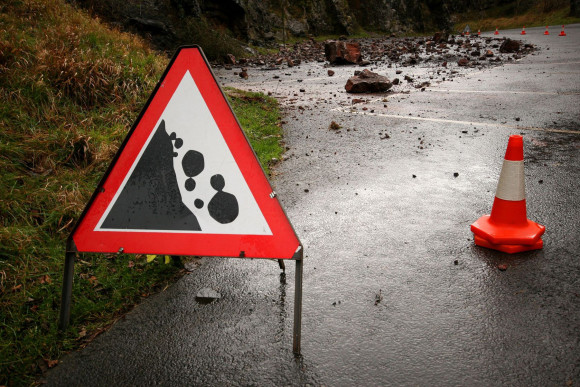 More than a year and half after the Haines landslides, organizations, both local and out-of-state, are still helping to repair damage from the dozens of landslides that occurred around the borough.

That recovery work has evolved over time, said members of the Haines Long Term Recovery Group and other organizations involved in recovery efforts.

“When we got started immediately following December 2020, a lot of organizations came together to figure out how we were going to address the impacts to people’s homes and living,” said Sara Chapell, a member of both the LTRG and Southeast Alaska Independent Living. “We’d never faced anything like this before.”

The landslides, driven by unusually heavy rain, killed two, but were scarcely limited to that, said Sylvia Heinz, coordinator for the LTRG. Smaller landslides around Haines cut off roads, washed through houses and entirely destroyed buildings.

During the initial response, the Borough of Haines focused its response on infrastructure projects that would be paid for or reimbursed by Federal Emergency Management Agency, while other organizations focused on individual homeowners, said Harriet Brouillette, tribal administrator for the Chilkoot Indian Association. Organizations had to scramble to help out individual homeowners while the borough government focused on different projects.

“We sat down and said, let’s figure this out. Let’s see what we can do. We worked with (Central Council of Tlingit and Haida Indian Tribes of Alaska) at first. We organized our staff according to their disaster recovery org chart,” Brouillette said. “We had federal highways funding. That enabled us to help out with driveways. That was day one. No one else was doing it. We had to step up where no one else was doing it.”

The division of what the borough would focus on and what would be left to other organizations was one of the early issues, Chapell said.

“The borough made it clear that they were only going to be participating in projects they could get FEMA to reimburse them for,” Chapell said. “We had to scratch our heads and say, what falls into that FEMA basket and what does not.”

Haines, a town of less than 2,500, lacked the manpower to work on anymore than the most crucial functions in the wake of a major disaster, Chapell said.

“We’re talking about rural Alaska. Haines Borough focused on what was most important, that the public infrastructure was safe. When a small municipality works on disaster recovery, it can’t work on other stuff,” Chapell said. “I think Haines is really good at response. We’re a giving community. We come together and there’s extraordinary generosity in this community. But I don’t know if we’ve ever faced a disaster of this scale and had to grapple with it.”

Since then, the LTRG and Chilkoot Indian Association have been working on helping residents with damages sustained during the landslides, Heinz said.

Team Rubicon, a veteran-founded volunteer disaster response agency, has been involved since relatively early in the process, said Brandon Callahan, operations manager for the team’s rebuild program, a long-term recovery program based on helping to overhaul buildings seriously affected by natural disasters.

Team Rubicon first came to Haines to assist disposal of destroyed drywall from inundated residences, augmenting local organizations with the muscle to move hundreds of tons of drywall outside for collection and disposal.

“One of the big questions in the beginning of all this was how to deal with the debris. The moldy drywall. The massive amounts of debris,” Chapell said. “Borough took on the upfront cost for disposal of debris. We didn’t have the people power to get the stuff out of the homes and into the containers. That is when TR was called.”

Team Rubicon provided the muscle to help people muck out their drywall, Chapell said, helping to remove more than 440,000 pounds of drywall. From there, Heinz, who started working with the team in operations outside of Haines, put forward a proposal for the Rebuild program to assist some of the most seriously affected residences in Haines.

“I came up the first time in November of 2021. That’s when we started to meet the clients, see the houses, see how we might be able to assist,” Callahan said. “We had to plug into the existing system and see what we can do with it.”

“We took (Spradlin) for TR’s approval in January 2022,” Callahan said. “We had gone through the bid process starting with local contractors and we weren’t able to make it work. Chilkoot Indian Association stepped up and that’s the only reason we were able to do it.”

The harsh winter storms of early 2022 and their massive snow loading proved one more obstacle.

“We approved the case and started procurement,” Callahan said. “When the materials were on the barge, that big winter storm happened.”

The snow loading buckled Spradlin’s roof, requiring more renovations, and nearly scrubbing the project, Callahan said. The buckled roof pushed the reconstruction months to the right, Brouillette said. But Team Rubicon was able to work with local contractors to get the roof sorted and push through, Callahan said.

“That was almost the hit where we couldn’t continue,” Callahan said. “Sylvia and I are entirely too stubborn though.”

“We’re a construction company inside of Team Rubicon,” Callahan said.

While the program is readjusting to the post-COVID job space, they’ve completed more than 670 projects since the program started in 2018, Callahan said, focused mostly around the Gulf Coast.

“It’s difficult to build a house with just volunteers,” Callahan said. “This one, we brought a big crew. When we walked in here eight days ago, it was just studs.”

Rebuild works with the homeowners to their vision, Callahan said, not to Team Rubicon’s idea.

For Spradlin’s house, that meant getting rid of feet of standing water in a basement riddled with mold and mushrooms, removing 90% of the drywall in the house, on top of repairing where the roof had buckled, Chapell said. For Spradlin, who is 83 and lives alone, that would have been a Herculean challenge by herself.

“The most vulnerable people are the most affected by the disaster. That’s true no matter where you are,” Chapell said. “SAIL had cases that we didn’t even know about for more than a year. We had people who were living in trailers with floors that were disintegrating. They were living in these horrendous conditions without any expectation that no one would help them.”

Heinz said the event was a wake-up for how vulnerable Alaska communities, without the resources or accessibility of the Lower 48, could be to disasters like landslides, winter storms, or other disasters. That motivated her to join Team Rubicon, Heinz said: to work with the organization to start building resilience right at home.

“What I learned in Haines is how vulnerable we are in Southeast Alaska. They can’t come help us. We’re not in a hurricane zone. We don’t have the resources,” Heinz said. “We have to be able to take care of ourselves, take care of our neighbors.”

Not every residence in Haines will be able to be fully rebuilt, Chapell said – the resources simply aren’t available.

“Part of it’s managing expectations. At the start of this process, we knew there were households that were not going to get back to 100%. That’s hard to face, but it is reality,” Chapell said. “Some of those could be businesses or households that, for whatever reason, don’t rise to the top of the vulnerability matrix. We have to make tough decisions.”

Heinz said they worked to help those hit hardest and least able to bounce back unassisted.

“The most vulnerable, marginalized populations are the most affected by disaster,” Heinz said. “Going through Lemmie Spradlin’s case, I feel that in my bones”

Now, Haines can help to pass those lessons on, Chapell said.

“It was hard in the beginning to go slowly. To set up that backbone of an organizational structure,” Chapell said. “That’s something we can share with other communities.”