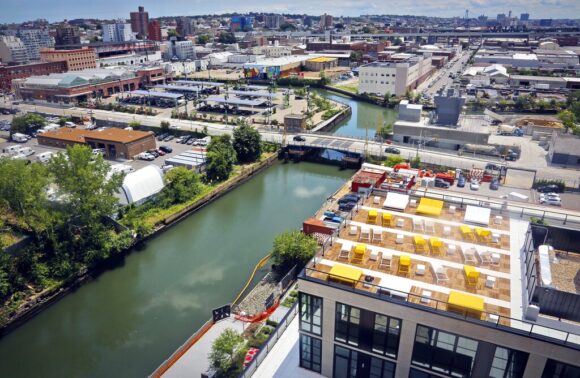 A decade after Superstorm Sandy pummeled New York and New Jersey in one of the costliest storms in U.S. history, the federal government is proposing a $52 billion plan to build movable barriers and gates across bays, rivers and other waterways in the two states hardest-hit by the storm.

The U.S. Army Corps of Engineers said Monday it has tentatively chosen an option for the massive task of protecting the region from the type of storm surge that wrecked vast sections of shoreline and interior areas during the Oct. 29, 2012, storm.

The release of the report came as Hurricane Ian slammed into Cuba on a path that would make it a potentially catastrophic Category 4 story when it reaches Florida, where 2.5 million people have been ordered to evacuate.

The proposal includes building moveable sea gates at the Flushing and Newtown Creeks; across the mouth of Jamaica Bay and two other waterways in Queens; the Gowanus Canal; Sheepshead Bay, Coney Island and Gerritsen creeks in Brooklyn; the Arthur Kill and Kill Van Kull between Staten Island and New Jersey; and the Hackensack and Passaic rivers in New Jersey.

The gates would remain open during calm periods, and could be closed when major storms approach. But the proposed barriers have drawn opposition from property owners who worry about how they would look, and environmentalists concerned about adverse effects on water quality and natural ecosystems.

Shore-based barriers including flood walls, levees and elevated walkways would be built in Brooklyn’s Bath Beach; Far Rockaway in Queens, as well as parts of Lower Manhattan, East Harlem and Jersey City.

Flood walls would be built in Newark along the Passaic River, along with berms and other barriers at various points in or near the New Jersey Meadowlands region in Secaucus, Harrison, North Arlington and Kearny.

The plan also calls for integrating natural solutions such as wetlands restoration and creation of “living shorelines,” with features such as oyster colonies designed to blunt the force of incoming waves in several spots to complement the man-made engineering projects.

“This is a significant milestone as we move towards a more resilient New York and New Jersey coastline,” said Col. Matthew Luzzatto, commander of the Army Corps’ New York District.

Kizzy Charles-Guzman, executive director of the New York City Mayor’s Office of Climate and Environmental Justice, called the study “an important step towards comprehensive evaluation of coastal hazards along our harbor.”

“The densely populated and industrialized New York-New Jersey Harbor region is among the most at-risk in the nation to extreme storms caused by climate change,” added Shawn LaTourette, New Jersey’s environmental protection commissioner.

Robert Freudenberg, a vice president with the Regional Plan Association, said the proposal “goes a long way toward protecting areas that are not currently protected.” He cautioned that support from local communities is crucial to any plan being implemented.

The study aims to protect critical infrastructure and population centers that were inundated by Sandy.

“In the instance of a large storm, storm surge barriers, navigable gates, and deployable flood barriers would help to reduce risk to vulnerable areas from flood damages relating to flooding, including the loss of human life and damage to existing infrastructure,” the report read. “Within areas of reduced risk are schools, parks, energy and transportation infrastructure, container and other cargo terminals, that would all see significant benefit through implementation of the study measures.”

The plan unveiled this week replaces an earlier proposal for a single six-mile retractable gate running between the Rockaways in Queens to Sandy Hook in New Jersey.

The study is similar to, but much larger than, an ongoing study by the Army Corps in New Jersey’s back bays, where flooding caused major damage during Sandy to areas away from the ocean.

That study proposes retractable gates and barriers across the mouths of several New Jersey inlets as well as in the center of bays to blunt the force of storm surges. It would cost $16 billion.

There is no guarantee Congress will fund any of this; it initially balked at providing $60 billion in relief for the region after Sandy hit, before relenting. But Freudenberg, of the Regional Plan Association, said Army Corps projects tend to be funded at a higher rate than other spending requests, calling this proposal “as close to assured funding as you can get.”

Even if funding were approved, the federal government would cover only 65% of the cost, leaving the rest to states and local communities.

Photo: — This photo shows a view of Brooklyn’s Gowanus Canal, July 5, 2016, in New York. A decade after Superstorm Sandy pummeled New York and New Jersey in one of the costliest storms in U.S. history, the federal government is proposing a $52 billion plan to build movable barriers and gates across bays, rivers and other waterways in the two states hardest-hit by the storm. (AP Photo/Bebeto Matthews, File)