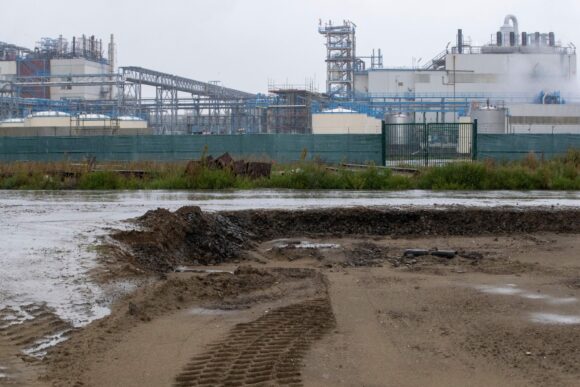 The Netherlands’s government is exploring its legal options against chemical giant 3M over pollution in the Dutch part of the Scheldt River.

For years, the company’s Antwerp, Belgium-based factory seeped contaminated groundwater into the Scheldt, a 350-kilometer (217-mile) river that starts in France and runs through Belgium and the Netherlands into the North Sea.

The Dutch government is now investigating the link between 3M’s operations in Antwerp and the chemical PFAS contamination that officials recently discovered in the Western Scheldt in the Dutch province of Zeeland.

The Netherlands “is currently mapping out the legal options for holding 3M responsible for the PFAS damage in the Western Scheldt,” said Liz Zoetekouw, a spokesperson for the Ministry of Infrastructure and Water Management by email.

PFAS, used to make products like raincoats, is called the “forever chemical” because it’s nearly impossible to get rid of. It accumulates over time in the soil, the water and in human bodies—and is associated with a host of health problems.

A spokesperson for 3M said the company declines to speculate about potential litigation.

“3M will continue to remediate PFAS where we are responsible, reduce use of PFAS in our products, and address litigation when it arises,” Corne Bekkers, a spokesperson for the company said in an emailed response.

3M’s manufacturing activities over several decades caused widespread contamination in the area surrounding its Antwerp factory, Bloomberg Businessweek reported in June. The government of the Flanders region in Belgium ordered 3M to shut down production of almost all PFAS chemicals after activists exposed the extent of the contamination around the factory, and tests on almost 800 local residents showed the vast majority had unsafe levels in their bloodstream.

The St. Paul, Minnesota-based company already agreed with the Flemish government to pay €571 million ($609 million) in damages. They also face possible civil cases by people suffering from health issues due to the company’s negligence.

Photograph: Earthworks near the 3M plant pictured during the pilot installation for effective PFAS purification, on the Lantis construction site of the Oosterweelverbinding, in Antwerp, on Sept. 27, 2022. Photo credit: Nicolas Maeterlinck/AFP/Getty Images